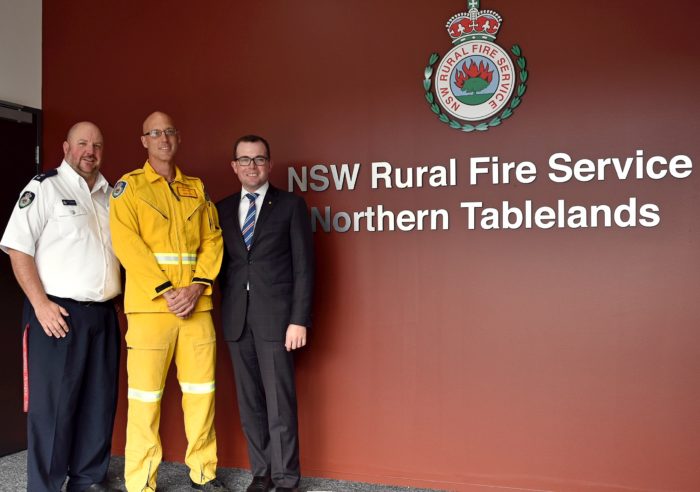 GLEN Innes NSW Rural Fire Service (RFS) volunteer Rick Ott has been honoured for his work as a Down the Wire Technician, receiving a Commissioner’s Certificate of Commendation in Tamworth last week.

Mr Ott, went ‘down the wire’ to rescue three people stranded by the heavy flooding on the North Coast last year.

Northern Tablelands MP Adam Marshall caught up with Rick earlier this week to offer his congratulations on the well-deserved accolade.

“Down the Wire technicians are some of the most highly skilled members of our rescue and firefighting services,” Mr Marshall said. “They are winched down from helicopters to rescue people in extremely difficult conditions such as boats capsized or flooding.

“Rick helped three people to safety last year after some of the most catastrophic flooding the Lismore area has seen in recent times.

“I congratulate Rick on receiving the Commissioner’s Certificate of Commendation which acknowledges his exceptional skill and bravery as a down the wire technician and recognises his service to the residents of the north coast during the floods.

“He’s done us all very proud.”

There are only 30 down the wire technicians across the NSW. Trainee technicians undergo intensive training in simulated flood conditions at the Whitewater Stadium in Penrith to learn how to safely extract people from rooftops, the tops of cars and flood waters. Training is conducted over multiple sessions, and takes up to three years to complete.

“This is a high-risk exercise and only the best candidates will go on to become technicians,” Mr Marshall said.

“During the Lismore floods, seven helicopters with 22 specialist personnel were deployed and only a handful of were down-the-wire technicians. Mr Ott played a key role in the response.

“Rick intends to continue his training and will start an air observer’s course later in the year, so he can help guide the fire response from air and help coordinate crews on the ground. The next step is moving into air attack – where he would be directly involved with the bombing operations.

Mr Ott’s service to the community and the RFS was also recognised earlier this year, when he was named Emergency Service Volunteer of the year during the Glen Innes Australia Day awards ceremony.

“I congratulate Rick on his hard work and dedication to the RFS. It’s volunteers like Rick that make the RFS the incredible organisation that it is and I wish him all the best with his ongoing RFS training,” Mr Marshall said.