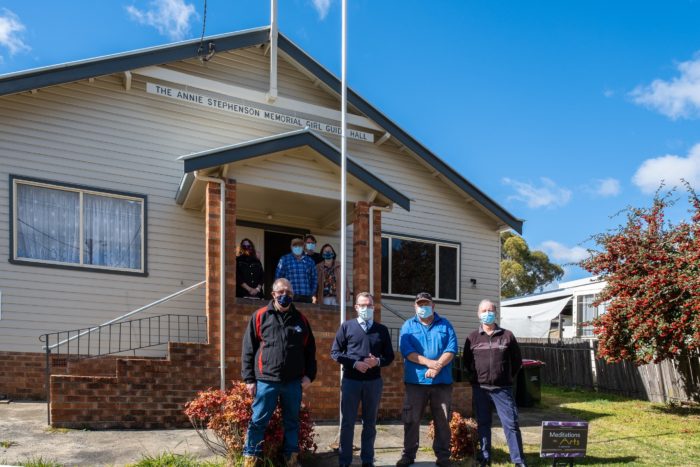 Last year Mr Marshall announced the group had received a $27,000 State Government grant to build a new clubroom on a block of vacant land provided by Glen Innes Severn Council.

Subsequently, the Crown Lands-owned Girl Guides hall found itself in need of new land managers. On inspecting the building, the club decided it could be repurposed to suit their needs and successfully took steps to be made trustees.

“This is not only a win for members of the Glen Innes Gem Club but the entire local community,” Mr Marshall said.

“As the new trustees, the club has been granted approval to use its grant money to initiate a significant refurbishment of the hall.

“By the middle of August tradies will have started the installation of a new accessible toilet, change room and kitchen area.

“Internally the building will be painted and lighting and electrics updated in order to accommodate a new solar system. Doors and entry points also need to be upgraded.

“Finally, a purpose build clubroom will be added where equipment can be stored and members can conduct classes.

“These improvements will benefit the four current user groups, while also providing an attractive events space which can be hired just off the CBD, in Glen Innes.

“I would like to recognise the consideration given by Glen Innes Gems Club to not proceed with constructing yet another community building, but using the funds to restore an existing asset.

“As I have said before, patience and perseverance are important traits amongst fossickers and I commend members of the club for their persistence in working with council and myself to find the right location.”

Glen Innes Gems Club President Chris Wallbridge said it had taken a team effort to secure the building and quickly commence the refurbishment.

“This a very exciting time for us which will undoubtedly bring about some positive changes with the management of the hall,” Mr Wallbridge said.

“We hope to have a large portion of the internal works completed by October.

“The club is looking forward to having a work room for members to use, learn and teach us how to utilise the amazing array of rocks and minerals found throughout the Glen Innes and surrounding district.

“Our longer term goal will be to expand upon the silver smithing classes we currently run, with other classes such as wire wrapping, carving, stone setting, jewellery making and any other interest members develop, so that material collected is turned into as many different things as possible.

“We are using this period to hit the reset button and are looking for new members and people with skills they would like share.

“Similarly if there are property owners who are willing to allow us on to fossick, visit old mine sites/machinery, we are fully insured and are respectful of the areas shown to us by the owner.

“We would like to thank Adam, his staff and the staff from Crown Lands for all of the assistance they have provided us to find this home.”