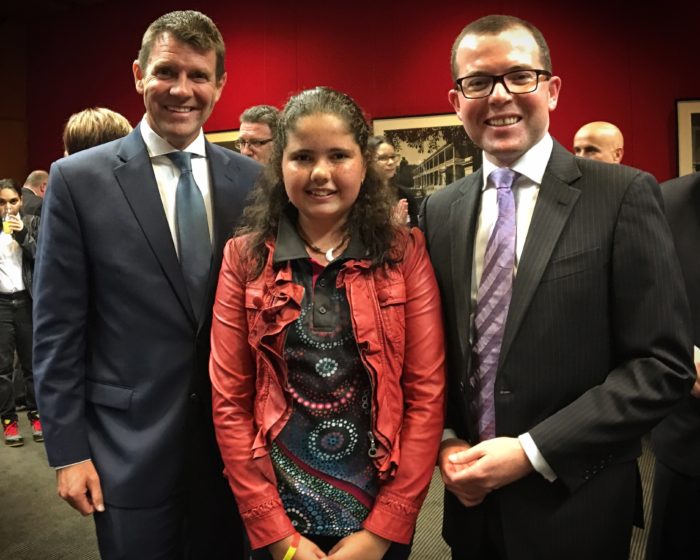 ALKIRA Blair-Bain, a Year 8 student at Glen Innes High School, received an insight into the workings of the State’s political machinery on Wednesday, when she and the other inaugural Aboriginal Students of the Year were introduced to Parliament House yesterday.

Alkira was among a small group of finalists chosen from the 70 students who were winners of the award, held to recognise young people who demonstrate leadership within their school and local community.

Local State MP Adam Marshall, who met again with Alkira during a special Parliament House lunch for the finalists, said he was proud to see her representing the Northern Tablelands community.

“As a committed student and cultural ambassador, Alkira was the ideal recipient for this award,” Mr Marshall said.

“Even if she never has any direct association with politics, this trip has given her an insight into how the system works. That should prove useful to an endeavour she chooses to take up, and will always be a useful reference as she grows into the leadership roles she may find herself in.”

Alkira and other finalists attended the Emerging Leaders Forum in Parliament House, where they met with Aboriginal, business and Government leaders.

The students also got a tour of Parliament House and a tour of the Aboriginal artefact display at the Australian Museum.

Minister for Aboriginal Affairs Leslie Williams, who hosted the students at the forum, said the day in Parliament gave the students a chance to interact with inspiring Aboriginal leaders in a range of professions.

“These students are already making outstanding contributions as young leaders in their communities and schools and this forum gave them an opportunity to meet with Aboriginal leaders in the world of entertainment, business and sport,” Mrs Williams said.

“I warmly congratulate all of the finalists and it was pleasure meeting them in Parliament House.”