GLEN INNES JOCKEY CLUB ON A WINNER IN WAR ON WEEDS 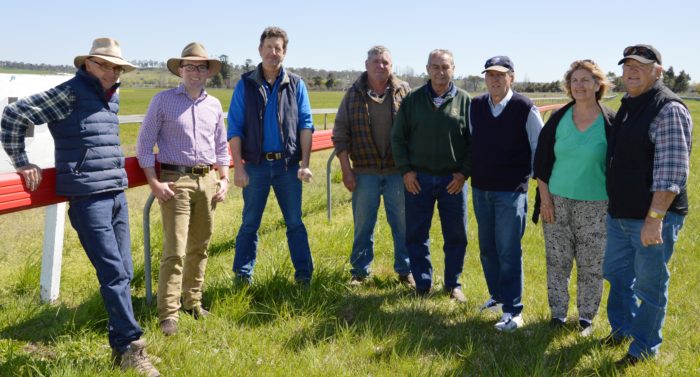 GLEN Innes Jockey Club says a $25,337 grant announced today by Northern Tablelands MP Adam Marshall will put it in the winner’s seat to win the race against weed control at the racecourse.

Mr Marshall said the funding would also give the club the vital ammunition it needs to mount a concerted attack on weed infestations on the reserve next to the course that have been encroaching on the track and grounds.

Jockey club president Mark Ritchie said they will use the funding on tools as well as a chemical regime to help eradicate the weeds and in the process help with beautifying the area which is at a high profile entrance to Glen Innes.

Mr Ritchie said the club had been busting its resources to try to maintain the grounds and will use it to also buy a new spray rig unit with tank, pump and reel.

Mr Marshall said the club was a hard working and progressive one and was looking to put the grounds into great shape for the big January 17 race day but also had some sound plans to promote the racecourse as a venue for other functions too.

“And the club is focused on maintaining the area outside the course and working with others, like the local council and a Work for the Dole program, to put in new fencing that frames that gateway entrance from the Inverell side of town,” Mr Marshall said.

“It has had a nasty battle with weeds around that area, and serrated tussock and Chilean needle grass, which are related, as well as St John’s Wort have been the worst offenders.

“The club has to get those woody weeds out and it’s not just a matter of weeds on the course and grounds; it’s about stopping them from spreading from outside-in but it’s a commendable community spirit they have, because they’re keen to tackle that problem to improve the look at the entrance to town too.

“The race track fronts onto the Gwydir Highway and that’s been an eyesore for a very long time so they are looking forward to eradicating those weeds and beautifying that side of the course.

“It will give tourists and visitors a much better and more attractive view of the course.”

The Glen Innes Cup race day is on January 17 next year and the committee is hopeful the weed control program before then will give it a glorious new look for that big day which attracts a big crowd, particularly from out of town.
Mr Ritchie said the club now had five trainers operating out of the grounds and 20-odd horses were being trained on course and were looking to continue to progress.

“It’s a very well financially-run club and we have put in some very good management practices but our biggest problem is maintaining everything and basically trying to do that with volunteers and a small committee so this funding for weed control is extremely valuable to us,” Mr Ritchie said.

“We have re-invented racing here and we are continuing to concentrate on making things better, in making our race day a good day out.”

Mr Marshall said the funding was provided under the Public Reserves Management Program which provides financial support for the development, maintenance and improvement of public reserves.

“Public reserves are wonderful assets that are highly valued by local communities and are vital to the success of local sports, social clubs, business and tourism,” Mr Marshall said.