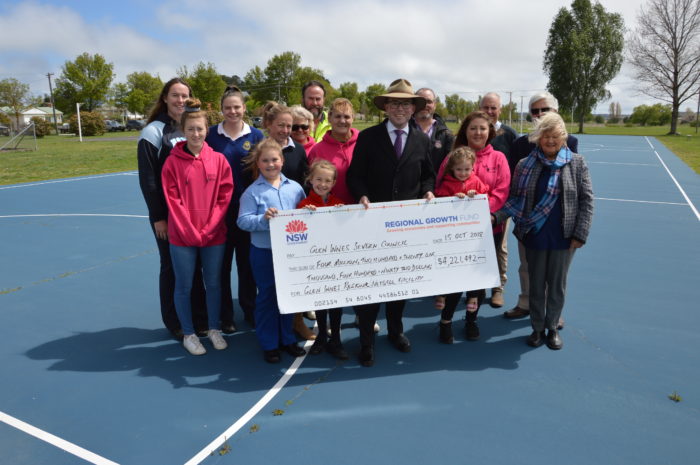 NORTHERN Tablelands MP Adam Marshall says a new $5.5 million netball stadium and four new courts to make up the Glen Innes Regional Netball Facility will shoot the complex and the sport into a new era of sporting excellence.

Mr Marshall was in Glen Innes today to announce that the stadium dream will become a reality with the NSW Government chipping in $4.22 million towards the new complex and amenities that will meet national competition standards.

Glen Innes Severn Council will add $1.28 million to the project that will see a stadium built at the Wilson Park Sports Precinct in the town to cater for more than just netball.

Mr Marshall said the project will shoot Glen Innes to a new high point level when it comes to hosting netball and other indoor sport codes.

“This grant through the Regional Sports Infrastructure Fund is a game changer for Glen Innes,” Mr Marshall said.

“The funding will help to pay for a new 2,125 square metre two-court indoor stadium with two outdoor additional adjoining courts that will make up a new netball facility in greater Wilson Park Sports Precinct in Glen Innes.

“Wilson Park already has three outdoor courts and four grass courts but they don’t meet sport standards – but this stadium and the new complex will, and that will have huge benefits.

“The new regional complex will help to cater to the growing population and growing participation across netball, as well as indoor sports such as basketball and futsal, which will be able to be played inside.

“And the stadium will get spectator bench seating, a rock climbing wall, player and referee change rooms and toilets.”

Mr Marshall said the Glen Innes Netball Association had identified the need to redevelop the existing facilities at Wilson Park to meet player demand, grow the sport and provide for the future.

“It will be a brand new game plan for everyone, and one that will attract more players and more competition, particularly on a regional level.”

The Glen Innes Netball Association has been working toward this end-game across years of cold and windy competition days, with the President Bec Cooke expressing her delight with the success.

“The association has been hampered due to the current courts being non-compliant for major carnivals and we’ve missed out on generating revenue because of that,” Ms Cooke said.

“Despite the playing conditions, Glen has consistently been able to produce athletes who have been selected into the Northern Inland Academy of Sport (NIAS), and there were seven girls selected in the NIAS squads between 2014 and 2016.

“Glen Innes teams have been on the state stage with great results over the past few years. I expect we’ll see that standard surpassed with the new regional facility in play.”

Glen Innes Severn Council said the government funding for a new complex was exciting news for the town.

“We have a fantastic netball fraternity in town,” General Manager Hein Basson said.

“We have four and five year olds training and this complex will be a sound and good foundation for development programs for players like those.

“The Glen Innes Regional Netball Facility will open avenues for other sporting codes and other recreational activities to form part of that complex.”