GLEN INNES PISTOL CLUB ON TARGET WITH $8,243 IN SAFETY UPGRADES 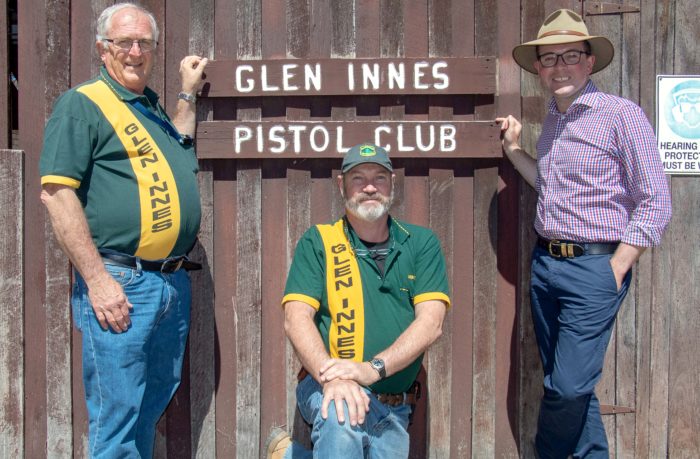 Mr Marshall said the upgrades would give the club a bigger shot at hosting national events in the future and attracting even more out-of-town shooters.

“The old log wall was built years ago but the logs had rotted and were collapsing from the weather and white ants.

“The new fully reconstructed concrete blocks will be a permanent solution to weathering and deterioration.”

“We’re thrilled with this funding because we were worried that the whole wall would collapse,” Mr Unicomb said.

“Adam helped us last year to secure some funding and that gave us the money to rebuild a security wall around the air pistol range. This grant is another injection that helps with more upgrades to bring the range closer to national standards.”

Mr Marshall said the club shoots every weekend, has about 40 members, but is growing in reputation and in attracting more shooters from outside the area to their big match weekends.

“A shoot there last weekend actually broke the record for the numbers of shooters, which had been set last year, so the club is growing and it is appealing to more shooters from more areas,” Mr Marshall said.

“This upgrade project meets another target in the club’s aim to reach a classification standard where they can host state or national shoots where records can be recognized or sanctioned so they bring more elite and top class shooters.”

Mr Unicomb said the recent shoot had attracted two Commonwealth Games medallists and the club wanted to build on that attraction in the future.

The latest funding for the pistol club came via the NSW Government’s Crown Reserves Improvement Fund and was one of 22 projects announced by Mr Marshall for clubs in his electorate that were sharing in over $700,000 from this year’s program.