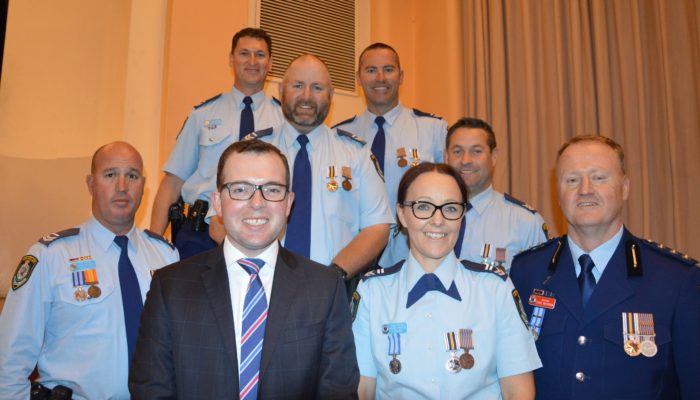 NORTHERN Tablelands MP Adam Marshall literally joined a cohort of coppers yesterday in catching up with some of Glen Innes’ finest as they were honoured at a special presentation in Armidale.

Five Glen Innes police officers were among more than 50 from across the New England Police Command who were presented with a variety of medals, plaques, clasps to medals and rewarded with tributes to their diligent and commendable service, their good conduct, their resolve under fire in emergencies and their dedication to the job.

Mr Marshall said the ceremony was a true reflection of the respect the force had for its officers and a commendable way of celebrating the principles of honesty, integrity and work ethic that made the police “family” such a powerful force in each other’s lives.

“It was a pleasure to see the dedicated and diligent service of many of our local police officers being recognised publicly at the ceremony,” Mr Marshall said.

“On behalf of the community, I thank them for their service, protecting the community every day on the front lines.”

Sergeant Mark Johnston and acting inspector Brad Wood were presented with their National Police Service Medals while Sergeant Johnston was also officially presented with the certificate for his warrant to sergeant rank earlier this year. Brad Wood also received his National Medal which recognises over 15 years’ service for all emergency service workers as well as long service and good conduct.

Senior Constable Patrick Cosgrove from the Tenterfield station was presented with his NPSM while senior constables Scott Beverley and Peter Kennedy, as well as leading senior constable Jaime Porter received their first clasps for their police medals for 15 years.