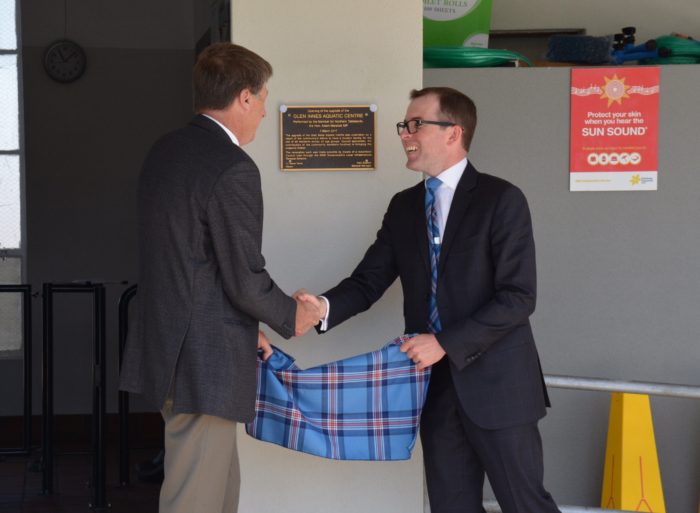 SUMMER may be winding down – but the newly redeveloped and heated Glen Innes Pool will likely keep drawing visitors looking to check out a newly completed major refit.

Member for Northern Tablelands Adam Marshall, who officially opened the refreshed aquatic centre today, said the upgrade works were very impressive and a credit to the vision and quality workmanship of Glen Innes Severn Council.

“Glen Innes has a colder climate – so heating is a necessity,” Mr Marshall said.

“Visitors can also look forward to new filtration, better wind and sun protection as well as a new spectacular water play area where the wading pool once sat”

“The pool is an important social, recreational and sporting hub for any regional town during the summer months, so it’s a valuable investment from state and local governments.”

The NSW Government offers low interest loans to councils to allow them to undertake works outside of their capital works budget, at a reduced cost to ratepayers.

“Through the state government’s considerable low interest loan, ratepayers will save substantially when held up against a comparable investment from the private sector”

Perhaps the most dramatic change is in the pool’s size. The large pool has been split into two, providing different opportunities and uses for the community.

“It’s given us a 25 metre standard pool and a seven metre learn to swim utility pool, which will help with learners and those in rehabilitation”

“Before we had a 33 yard pool, which was no longer a standard – it was really neither one thing nor another. This will help kids who are travelling for sport, and also those who are coming here”