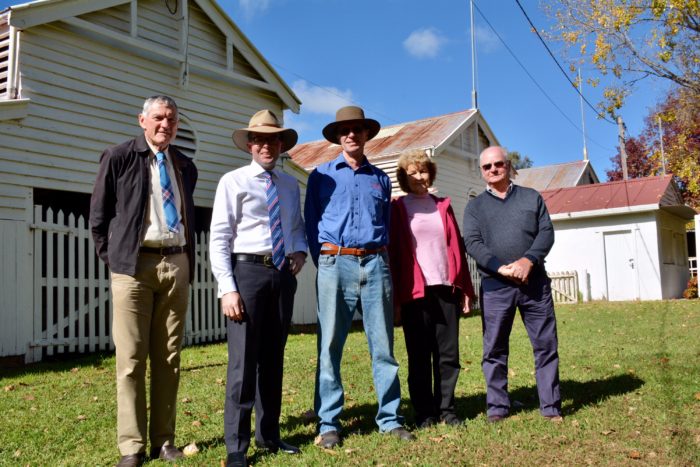 JUDGES, cattle and spectators will experience the 2018 Glen Innes Agricultural Show in extra comfort, with a new roof soon to be built over the historic Stud Cattle Pavilion thanks to a $30,000 NSW Government heritage grant.

Member for Northern Tablelands Adam Marshall visited the showground last week to announce the funding, describing the iconic building’s 107-year-old corrugated iron roof as “well past its use by date”.

“Every year the Glen Innes Show attracts cattle from right across the region, with a very high standard of competition for all ages and breeds,” Mr Marshall said.

“However, while the cattle get better every year, the same can’t be said for the building they’re housed in. For over a century, minor works have patched up parts of the roof, but it is still hot in summer and leaks when it rains.”

The Glen Innes Showground Trust has taken many of the upgrades into their own hands – staging a series of working bees between 2012 and 2015 to rejuvenate the aging infrastructure. Sinking posts were excavated, stripped and secured with a cement and metal base, halting the sagging of the century-old roof.

Mr Marshall said the redevelopment would lighten the load for the Showground Trust.

“I commend the Trust members for their impressive efforts in drumming up volunteers to fix parts of the building – but a new roof is a huge undertaking, both expensive and requiring a lot of work,” Mr Marshall said.

“Thanks to this funding, the redevelopment will make the pavilion much more comfortable for man and animal alike, and reduce the ongoing maintenance required by Trustees.”

Glen Innes Showground Trust Chairman John Flynn said while much of the original 1909 building would soon be replaced, the venue will retain its early federation charm.

“It’s leaking and the foundation has rotting timbers, so we’ll replace the roof and guttering,” Mr Flynn said.

“We can’t change the structure; we want to keep it the same – which will make it a little more expensive than it would be otherwise. We expect to have it done by the next Glen Innes Show.”