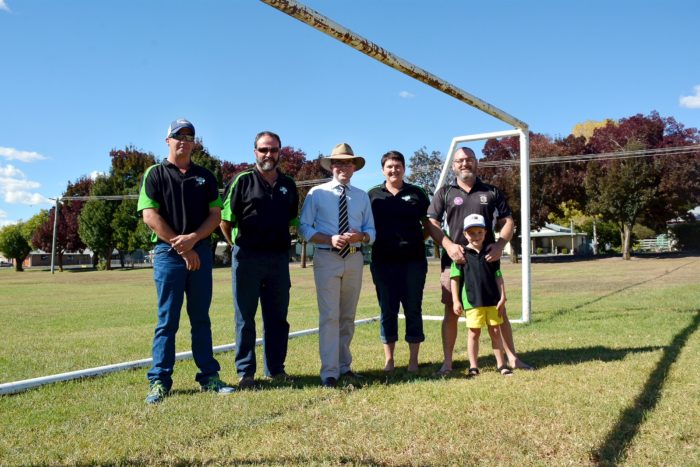 Mr Marshall has announced a $4,070 grant for the junior club to buy new goal nets and a line marker to be used at the Wilson Park fields.

“The new ones are bright white and replace some pretty crappy ones that have been there for years and we’ve also got a u-beaut new line marker that we can use exclusively to mark up the six fields the juniors plays on every weekend,” Mr Parkes said.

Until now, the club has shared a line marker with other local grounds which meant it ‘cops a bit of a flogging’ and is in high demand.

Mr Marshall said the new equipment would now make life easier and quicker for the parents and sports supporters to set up for play for the 220-odd soccer players who use the fields.

“About 200 of those are junior players who play there every weekend so the club’s plan to continue upgrades there is another step forward,” Mr Marshall said.

“This grant funding is the latest for the club as it strives to fix up Wilson Park with an ongoing schedule that fits with an overall sports masterplan that will see more sports clubs use the grounds there.”

Mr Parkes said the fields were pretty rough and another goal was to see them levelled and irrigated in the future.

“Adam has been pretty interested in our plans and helping us get this latest grant is terrific,” Mr Parkes said.

“Adam helped us with a grant application not long ago and out of that we were lucky to get two defibrillators under a NSW Government program. We’re having specialised training in using those this month.”

The defibrillators were among 13 worth $16,900 announced by Mr Marshall in April for regional clubs.

Mr Parkes said the two Glen ones will be based at Wilson Park where rugby union, netball and soccer share the facilities, with plans for cricket and Little Athletics to eventually move there too.

The latest soccer funding spend has been completed just as another round of applications has opened for the hugely popular Local Sports Grant Program.

“This is an extremely popular grant program for local sporting clubs looking for that little extra cash to complete a project,” Mr Marshall said.

“It is open to all local sporting clubs to upgrade facilities, start a new program, upskill volunteers or hold a community event.

“Local clubs can apply for up to $25,000 to fund fund individual initiatives, with up to $50,000 set aside for the Northern Tablelands electorate.”

“Our local sporting clubs are mostly run by dedicated volunteers so even a few thousand dollars can dramatically upgrade their facilities and buy much needed equipment.

“I’d encourage all local sporting groups with a project they haven’t got ready cash for to consider applying for one of these grants.”

The NSW Local Sports Grant Program is now open and will accept applications until 24 August 2018.