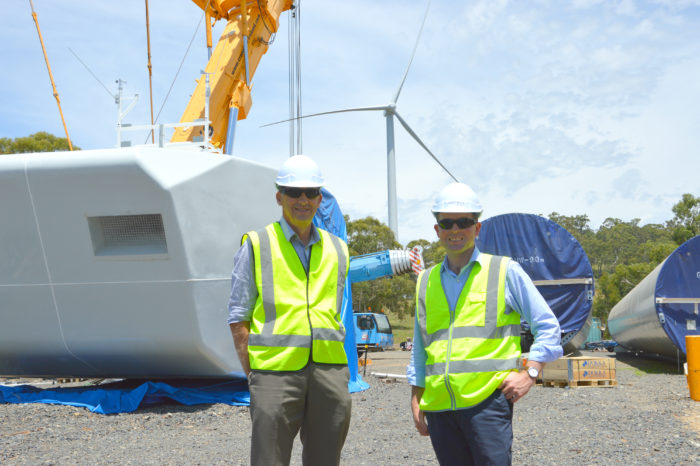 SOLAR will soon be added to Glen Innes’ growing renewable resume, with all funding for White Rock Wind Farm’s photovoltaic alter-ego now in the bank.

The 20 megawatt solar facility will be built at the northern end of the White Rock Wind Farm, 18 kilometres west of Glen Innes. The NSW Government approved the development in June last year – leaving White Rock to secure the required $41.4 million in funding.

The project has now reached ‘financial close’ – with all financial agreements signed and conditions for delivery now met.

“The White Rock Wind Farm has new turbines going up day after day. With the required cash in hand, the solar farm can now follow suit,” Mr Marshall said.

“This new solar facility will turn the lights on in over 7,000 homes across the state, adding to the 175 megawatts the adjacent windfarm will produce. With construction starting in July, travellers between Glen Innes and Inverell may soon notice an increase in construction traffic, as panels go up behind the scenes.”

The Australian Government has contributed $5.4 million funding support through ARENA – with remaining funding further $25 million from the Agricultural Bank of China and $11 million in Goldwind’s equity.

Mr Marshall said local suppliers should take the opportunity to be a part of the project.

“Goldwind is looking for local businesses to help supply the parts for this massive project,” Mr Marshall said.

“The company will soon launch a Local Business Participation Program, to identify suppliers from across the New England that could help out. I’d like to see as much of the $41 million stay local as possible.”

The project will employ up to 75 people on site throughout the construction phase and three people during ongoing operations of the facility.

Construction is due to be completed in January 2018.