GLEN INNES WILSON PARK ON THE BALL WITH GAME-CHANGING $512,443 GRANT 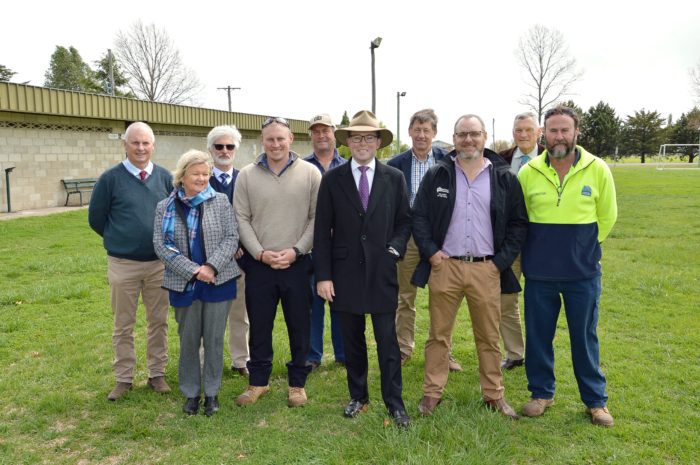 Mr Marshall said the windfall would allow for mega-sport infrastructure upgrades at the fields.

“This grant will give a huge kickalong to multiple sports that use the complex, including soccer, rugby union and netball and pave the way for little athletics to move in as well,” Mr Marshall said.

“Even more importantly, it will give the complex the kinds of facilities and modern amenities that will make it a magnet for other sports and other users.”

“This means such a lot for soccer – at the moment the pitch is dilapidated with divots and uneven patches and the grass cover isn’t good so you get the occasional knee and ankle injury,” Mr Arandale said.

“We’re really looking forward to the fields being dug up, laser leveled and re-turfed with a new underground irrigation system.”

Mr Marshall said the project would score more goals off the field, with an upgrade to the amenities block with new toilets and showers, better storage space on the soccer side of the park but also an upgrade to the existing rugby club house across the road to bring it up to standard.

“Our facilities were built back in about 1982 and there’s really been no work done to it since then but our share of the funding will allow us to upgrade our facilities to a level, particularly for women, that meets today’s sporting requirements,” Mr Price said.

That will include sectioned change room facilities to afford privacy to male and female players, that haven’t been available up until now.

Across the road, the amenities block used by soccer will also get a modern makeover, including canteen improvements, a reconfiguring for male and female players in the change rooms and running hot water.

“We’ve got toilets and showers but only cold water and now we’ll get hot water and that will be really good when it comes to Glen Innes in winter,” Mr Arandale said.

He said there were 225 junior soccer players in Glen Innes, the second biggest sporting code in town. Senior soccer runs two divisions but he thinks the latest works will boost numbers, especially in adult ranks.

“Soccer is for six months of the year but with these works we will probably start a summer footsal competition and bringing the athletics track to Wilson Park will be really good too,” Mr Arandale said.

Mr Price said the latest project works would build on some improvements gained with earlier smaller sporting grants and would create Wilson Park as a sports hub.

“Under this we will get a great soccer field and a full sized cricket pitch,” he said.

Glen Rugby returned to Wilson Park this winter season after a few years of playing at the showground, because the facilities weren’t up to scratch, but some remedial ground surface reseeding, fertilising, regressing and irrigation at Wilson Park had bought them back to their home base.

Mr Marshall said a cooperative sporting club approach by the Wilson Park users, was driving a new found success for the whole sporting community in Glen.

“All these groups have been positive and talking with each other about the best things to achieve for all sports and that’s a real success story too,” Mr Marshall said.

“This half-million dollar project will increase the capacity of Wilson Park to cater for changing demands but broaden the attraction for using it and that’s one of the concepts contained in the local council masterplan for that precinct.”

“The fact that cricket and Little Athletics are looking to move there is proof that if you provide good quality grounds and amenities, you get more people using it, and real value for dollar investment for the community.”

The $512,443 project comes hot on the heels of news from Mr Marshall that a new $5.5 million netball stadium and four new courts will be built at Wilson Park to make up the Glen Innes Regional Netball complex.