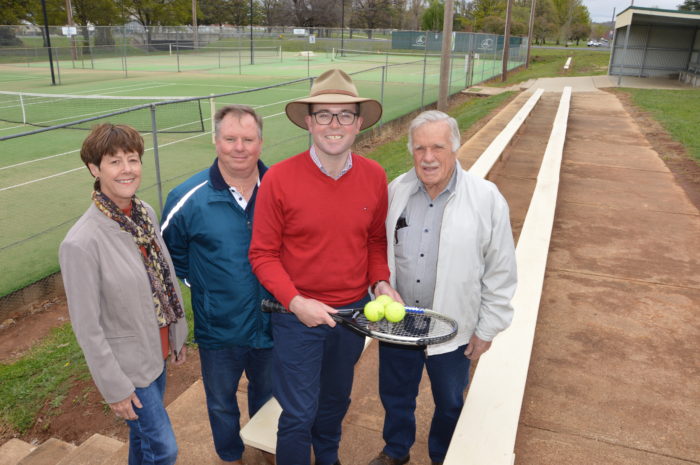 THE tennis club has been doing patch up glue jobs on its old courts for a few years but now the Glen Innes tennis complex will get some brand new cover courtesy of $56,530 in NSW Government grant funding, announced today by Northern Tablelands MP Adam Marshall.

Mr Marshall served up the funding for the Glen Innes Tennis Club to tear the old artificial grass on two courts and replace it with a new synthetic surface that is fit for professionals.

Mr Marshall was in Glen Innes to deliver the good news to local players and tennis officials this week. Club President Peter Haselwood said the funding news was right on the mark.

“This grant has come in the nick of time, it’s fortuitous, we really appreciate it and the work Adam has done to get it for us,” Mr Haselwood said.

“We’re a small club with a small base and that means to save a bit takes ages and you can’t get big things done all the time, so we’re very appreciative of any grant we get, and this one will go a long way.

“Adam helped us to get some money in 2014 to re-carpet two of our courts and now we’ve got more to do another two and that’s great.”

Mr Haselwood said the two courts, originally done with carpet cover back in 1994 were in bad condition, worn out and starting to rip and tear. Now, they’ll be redone with new synthetic grass.

“There’s about 60 or 70 full playing members and 25 or so junior players, so it’s a complex that is really a part of the fabric of sport in Glen and keeping the playing conditions to a standard for good play is pretty important to all of them,” Mr Marshall said.

“But there’s a lot of social players too who like to use the courts, and visitors to town who want to have a hit up, so there’s players there most days of the week.

“The existing carpet on two courts is worn out after 24 years of constant use and due because of surface damage, including the deterioration of the markings on the general court, the club has been concerned about the overall safety of all players.

“A number of players have complained that the court surface is now substandard and dangerous – but this project will resolve all those issues.”

Mr Haselwood said the courts passed their use-by date about five years ago.

“The ball bounces unpredictably and it’s reached the stage where competition tennis wasn’t very much fun,” he said.

Mr Marshall said the upgrade would keep the club in the game when it comes to first class tennis as well.

“The club has hosted the Far Northern Championships for 70 years and celebrated that milestone last February, and there’s been long running A Grade and junior tournaments there ever since, except for a couple of years during the Second World War, so keeping the court surfaces in first class condition ensures that legacy continues and the club can accommodate more players and more good courts,” Mr Marshall said.