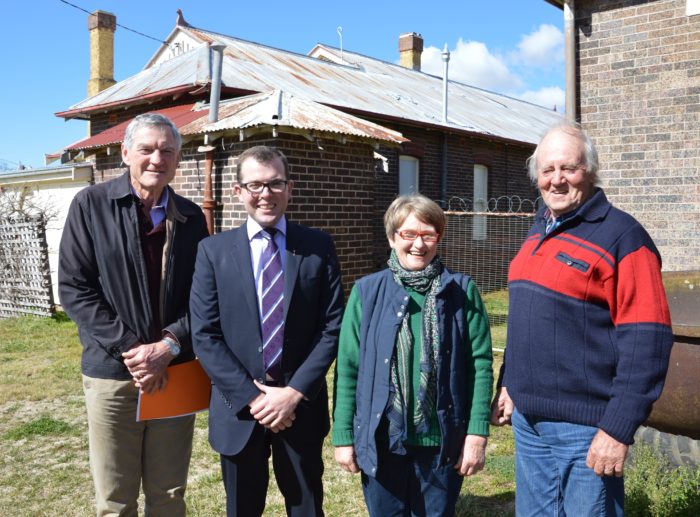 THE Glen Innes Historical Society will have remnant asbestos removed from the roof of the former Nurses’ Quarters at the Land of the Beardies Museum after receiving a $17,160 grant from the State Government, Northern Tablelands MP Adam Marshall announced today.

Mr Marshall attended the Historical Society’s annual general meeting on Monday and gave to good news to members. He said the funding from the government’s Public Reserve Management Fund (PRMF), would allow the Society to utilise a $25,000 grant secured last year from the state’s Community Building Partnership program to replace the roof on the historical significant building.

“When work began last year to remove the ageing roof on the former Nurses’ Quarters asbestos was discovered in the roof cavity, which had to be removed before the works could proceed,” Mr Marshall said.

“All work came to a halt and the Society applied for funding through the PRMF to cover the cost of the removal of the asbestos. I’m delighted we’ve been able to secure this support from the government, which means the whole project can now go ahead

“The building is important as it is used for storage of textiles and all other items not currently on display in the main museum.

“It also houses the specially designed costume room with special storage facilities for dresses and textiles and there is a plan afoot to use it to display office equipment and sewing machines.”

Mr Marshall said the Museum and its wonderful collections were important assets for the Glen Innes community and he was delighted the Government had seen the importance of providing this vital financial support to ensure the project could proceed.

Glen Innes Historical Society member Eve Chappell said they were very excited to receive the news of their successful application and thanked Mr Marshall for his support.

“This is such an important project for the Historical Society and wonderful that we can now get this asbestos removed and then get on with the job of replacing the roof,” Mrs Chappell said.

“Since the Historical Society took over management of the old hospital 1970, we’ve managed to complete some major works and turned the site into one of the finest museums in regional NSW. The next stage will be to replace the guttering and downpipes on the nursers’ quarters, then the job will be complete and something we’ve needed to do for a while.”