GREG DOES A DECADE FOR DELUNGRA 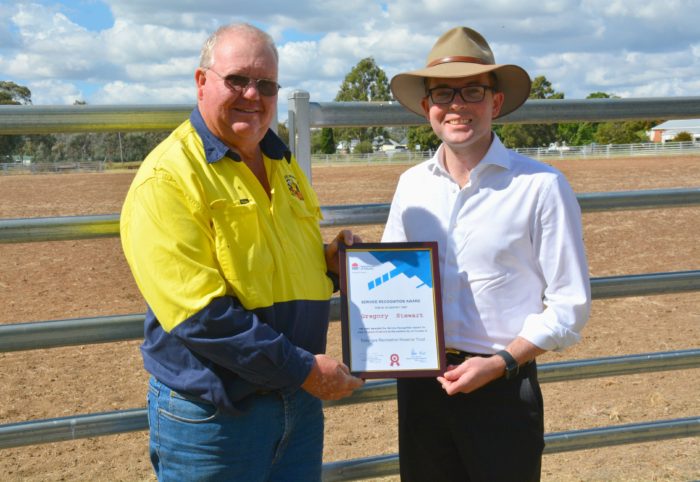 Member for Northern Tablelands Adam Marshall with Greg Stewart at the Delungra Sportsground where he’s been volunteering for a decade.

DELUNGRA’S Sportsground is an integral part of the town – and a vital part of its committee has just been thanked for their 10 years of service to the Recreation Reserve Trust.

Greg Stewart started off as a member of the town’s campdrafting committee in the late 70’s – where he used the reserve on a regular basis as part of the town’s iconic drafting events. When a spot came up on the Reserve Trust – he felt it was his turn to be drafted.

“The town’s got to be kept going. It’s a little town, which means everyone has to do their part. I just do whatever’s needed.”

Member for Northern Tablelands Adam Marshall recently presented Greg with an award recognising his decade of service to the Crown Reserve.

“Towns like Delungra are kept aloft by people like Greg Stewart, who put in more than their fair share of work in voluntary roles,” Mr Marshall said.

“The Delungra Showground is not only a fantastic resource for the community; it also helps the town bring in thousands of visitors from across the country.

“That’s a fantastic economic driver for any town with a population of just a few hundred – it goes a long way towards bringing money into a town where every dollar helps.

“I join the whole town in thanking the entire Delungra Recreation Reserve Trust, and personally congratulate Greg Stewart on a decade’s hard work.”

The showgrounds are now gearing up for the Delungra Dog Trial Championships, to be held in August.

Mr Stewart says expectations are high, after the event had to be cancelled in 2016.

“It draws people from Southern Queensland and all over NSW,” Mr Stewart said.

“They buy food here, we support Inverell, some of the visitors buy fuel – it’s money spent in Delungra that wouldn’t be there otherwise.”