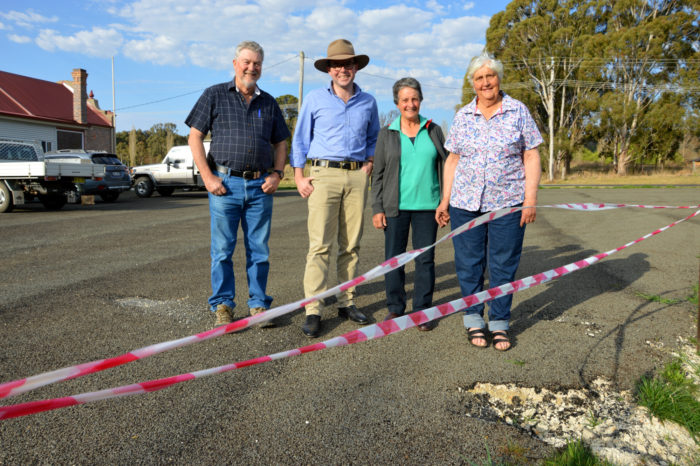 PARKING at Ben Lomond’s War Memorial Hall will soon be easier than ever with a NSW Government grant paving the way for upgrades that will boost safety and usability of the venue, Northern Tablelands MP Adam Marshall announced today.

Mr Marshall said the $3,380 grant from the NSW Government’s Public Reserve Management Fund would be used to install wheel-stops at the Ben Lomond War Memorial Hall, to prevent vehicles from straying off the carpark.

“The recently built carpark has helped locals use the iconic century-old hall safely and easily, but has introduced its own set of challenges,” Mr Marshall said.

“Drivers have had issues parking without any clearly marked bays, with the smaller bitumen area quickly becoming busy and confusing during major events.

“Some drivers have accidentally driven into the ditch, bottomed out, and only been freed with the generous help of bystanders.”

Mr Marshall said the funding would buy a series of rubber wheel stops for the car park, helping with the Trust’s plans to improve vehicle access.

“The $3,380 will build a series of wheel stops for the carpark, making it instantly clear where people can and cannot park, while stopping them from rolling over the edge,” Mr Marshall said.

“With these parking spots locked in, the trust will be able to further expand the carpark – adding a wider bitumen area to accommodate a mobile cool room.

“These wheelstops are just the beginning of a major renovation project to ensure the Ben Lomond War Memorial remains the focal point of the local community.”

Secretary of the Ben Lomond War Memorial Hall Trust Dorothy Every said the car park could be very confusing during busy events.

“Parking off the road is much safer, but a couple of problems have arisen,” Ms Every said.

“This funding will finally designate the parking area – we’re hoping to add a little more bitumen sealing to one area that will help install a cool room out the back.”