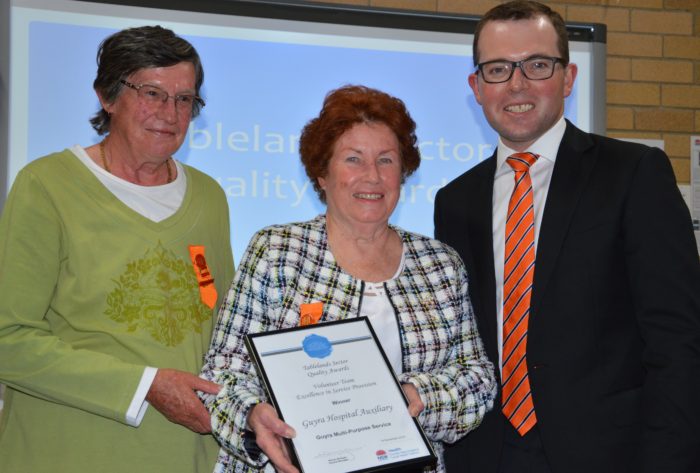 THE Guyra Hospital Auxiliary has been named the top volunteer group for excellence in health service provision across the Northern Tablelands health sector.

President Patricia Fields and its immediate past president Dianne Burey accepted the award from Northern Tablelands MP Adam Marshall at a ceremony in Armidale on Monday.

Mr Marshall presented the awards to health professionals across the region including to nursing and staff team leaders, project designers, volunteers and consultants for the best of programs and people from the Inverell, Guyra, Glen Innes, Armidale and Tenterfield health areas.

Mr Marshall said the power of people to lend a hand and give extraordinary amounts of their time and effort on a voluntary basis, particularly to health services and to the people seeking healthy outcomes, needed to be acknowledged and the Tablelands Sector awards were one way of doing that.

An administration officer with the Guyra Multi-Purpose Service, Alisa Kennedy, was also named one of the five finalists in the individual category for excellence in staff service provision.

The Guyra auxiliary was honoured for the extensive number of events and activities it organised to benefit the local multi-purpose service.

This included street stalls, book fairs and raffles that provided for everything from new equipment and hospital bed products, to craft supplies, to entertainment – and even to supplying the bird seed to encourage birds into the Guyra MPS gardens so patients could enjoy them too.

One of these was for the development and introduction of the Purple Folder, a resource folder on dementia and delirium which provided for one central depository for information on the two syndromes for nursing staff.

In presenting the award Mr Marshall said that unfortunately Northern Tablelands would be one of the regions hardest hit for increased dementia sufferer statistics into the future, with regions to the south and west of the tablelands also high on those data profiles.

“So, caring and dealing with dementia needs to be a real focus for us and getting ahead of the herd with the resources available to our health services is so important,” Mr Marshall said.

“The awards ceremony also told us that that about 20 per cent of people over the age of 70 who are admitted to hospital have dementia and the rate increases with age.

“Another 10 per cent of older patients are admitted with delirium with a further eight per cent developing it during their stay. It is thought that the number of people with dementia in NSW will increase four-fold from 342,800 in 2009 to 900,000 in 2050.

Tablelands Sector general manager Wendy Mulligan said while it was very difficult to choose winners, the full list of finalist nominations displayed exceptional service provision programs and she was very proud of all the staff who had participated.

ANOTHER $200,000 TO COMPLETE INTERNAL FIT-OUT OF MOREE PCYC

Member for Northern Tablelands Adam Marshall is delighted with a record Budget for the region handed down today, with... Read More