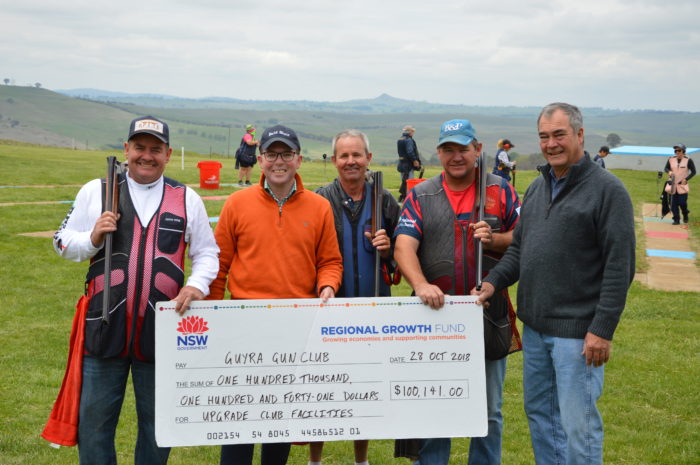 Mr Marshall said the financial win would allow the club to construct a new publicly accessible amenities block and create many more powered camping sites for use all year round.

“Clubs like ours just don’t get this sort of funding often and for us to get a grant of this extent is rare. Usually it revolves around some smaller grants, with working bees and relying on members with some trades experience to invest their time and expertise so often to help out.”

“By offering more facilities we can then attract more shooters to the Guyra area and that will have a flow-on effect,” he said. “Because the gun club is close to the New England Highway, it gives camping opportunities in town outside of the normal shooting calendar.”

Mr Marshall said the grant would allow the club to build a new standalone amenities block to be built near the caravan sites and additional to the current block used by members and visiting shooters attached to the clubhouse.

The increased number of powered camping sites would increase the attraction for passing campers to stay in Guyra, not just for traveling shooters but also for the general grey nomad army.

This latest funding comes just a few months after the club was awarded almost $8,000 from the NSW Government to upgrade its toilet and shower facilities and provide disabled access.

Mr Marshall said the existing facilities had been stretched, particularly at the club’s larger shoots when people come from interstate to compete.

“Many visiting shooters and their families camp at the club grounds for a number of days and so these facilities are critical to keeping these large events going in our region,” he said.

“The Guyra Gun Club has a proud tradition when it comes to shooting – we’ve had Olympic and Commonwealth shooters like Terry Rumbel come out of this club, and many state and world championship placegetters as well, so we know just what a great breeding ground it is,” Mr Marshall said.

“We’ve only just seen Ben Rumbel finish sixth in the World Championships in Wagga, as well as breaking a club record over the weekend, and then there’s great shots like John Reid and John Smith who are shooting really well in competition.

“Guyra attracts shooters from everywhere and it’s one of the strongest clubs around with a membership of 110 that prides itself on encouraging younger and up-an-coming shooters to do better.

“This project will not only improve facilities for them but will bring other benefits to the local community through increased public use of the venue.”

The funding comes from round two of the NSW Government’s Stronger Country Communities Fund.