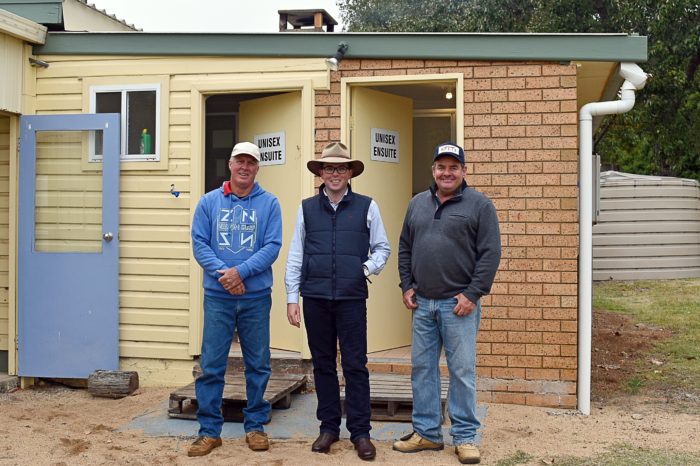 GUYRA Gun Club members were celebrating over the weekend, with news of an almost $8,000 grant from the NSW Government to upgrade its toilet and shower facilities.

Northern Tablelands MP Adam Marshall visited the picturesque club grounds over the weekend to announce the $7,994 funding and discuss plans for further improve to works at the facility.

“I congratulate the club and its’ hard-working members on securing these funds,” Mr Marshall said.

“This funding will allow the club to complete a much-needed upgrade of its toilet and shower block and construct disabled access toilet facilities, for the first time.

“The current facilities are stretched, particularly at the club’s larger shoots when people come from interstate to compete.

“Many visiting shooters and their families camp at the club grounds for a number of days and so these facilities are critical to keeping these large events going in our region.

“There are also a growing number of wheelchair shooters getting involved in the sport, so it’s important to have proper amenities to cater for all members of the club and visitors.”

Mr Marshall also took up the challenge and tried his hand with a gun in hand.

“I had the benefit of some expert advice from club members and did much better than last time – I managed to hit four or five clays and had a great time,” he said.

Club secretary Greg Brunsdon also showed Mr Marshall plans to expand camping options at the club grounds, including building an additional amenities block at the northern end of the club facility and extending power outlets for camper vans and caravans

“I look forward to working again with the club to obtain funding from the state government to continue to improve facilities, which will benefit our region,” Mr Marshall said.