GUYRA POLAR BEARS DIVE INTO A BIG YEAR WITH $13,000 GRANT 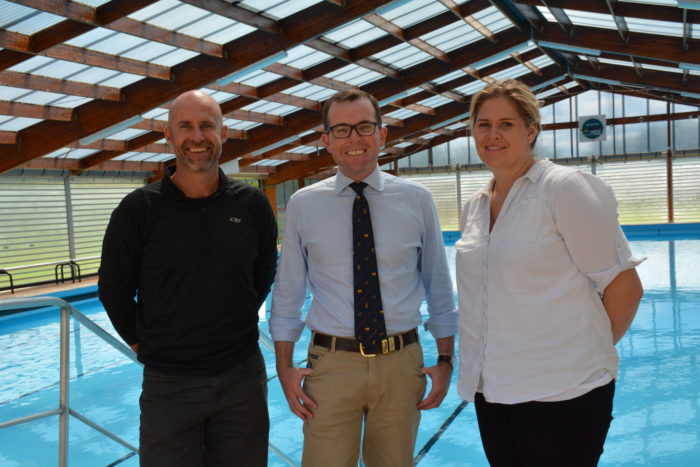 The club will soon have a new and improved storage area thanks to a $10,822 grant from the government’s Sport and Recreation fund, which will allow the Polar Bears to remodel a currently redundant section of the men’s room into a repository for training equipment.

Not only that – the club is ready to lap the competition with a second grant to further train coaches – with $1,957 to train their head coach to help kids compete at a higher level.

Northern Tablelands MP Adam Marshall was in Guyra yesterday to announce the funding and said the club was an important social and sporting icon for the community.

“Year on year, the Polar Bears are picking up members and medals, which is a testament to their enthusiasm and talent,” Mr Marshall said.

“Last weekend I attended the end of year award ceremony and was struck by the dedication of volunteers and swimmers. For a smaller town with a colder climate to pick up 60 members in a season is nothing short of extraordinary.

“This funding will help the club compete against the bigger clubs, through better facilities and more options for local youngsters.”

Guyra Polar Bears President Sarah Campbell said while the club was running out of space – they’ll use the nearly $11,000 grant to remodel the men’s room.

“It’s quite big – there’s access at both ends, we’re blocking off the eastern end and making it sectioned for storage,” Mrs Campbell said. “Everything can be stored correctly – whereas at the moment, we’ve got to overcrowd a space, and jam it in.”

That will help the club accommodate the growing membership – and the second $2,000 grant will assist the town’s swimming elite to compete regionally.

“We’ve got some kids who are interested in more competitive swimming – and their level of swimming is much more advanced,” Mrs Campbell said. “We currently do the local carnival – and so the faster kids have got the opportunity to compete at other levels we’ve got to train up a coach.”

While swimming is now winding down for Guyra’s colder months, the club will use this time to prepare for the summer season. They’ve got lofty ambitions – and are preparing for a huge 2018.

“The kids have had a great year, they’ve put a lot of effort in – and due to numbers increasing in the club, we’re looking at training some of our parents to coach as well,” Mrs Campbell said.