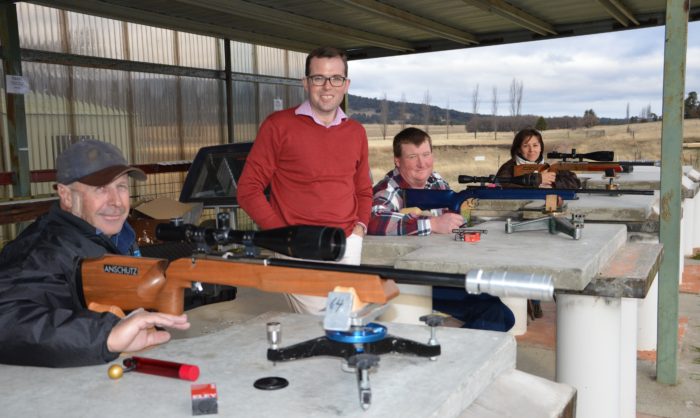 “I’m very pleased the Guyra SSAA was successful in its application for funding,” Mr Marshall said. “Their range is impressive and I commend the association for continuing to improve its facilities.

“The range is used on a rotation basis for a few Northern Inland competitions which include Armidale, Inverell, Taree, Coffs Harbour, Glen Innes, Port Macquarie and Grafton and because the range is so popular, they can usually rely on attracting a good number of competitors to their shoots.

“This particular site is a metallic silhouette range with targets from 25 metres to 500 metres; it’s quite versatile and can accommodate many different classes of competition.”

Mr Marshall said the club would now extend the concrete firing line and finish the last stage of roofing which would cover 20 fixed benches.

“The range is used every weekend by association members so this extension of the firing line and the roofing will be very welcome and I’m pleased the State Government has been able to assist with this upgrade,” he said.

Guyra SSAA Secretary Andrew Thompson said the range was very popular with visitors and they were always very keen to return to the site.

“The range is utilised by quite a few different clubs, we have the Australian Deer Stalker Association and The Armidale School Adventure Group use our facilities on a regular basis,” Mr Thompson said.

“We have lots of visitors from Sydney who just want to keep coming back so we’re very pleased we are in a position to complete this upgrade to our facilities.