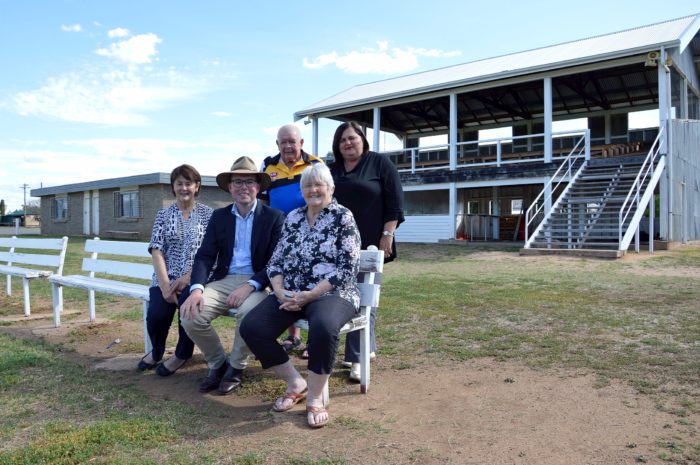 Mr Marshall said Gwydir Shire Council would use $447,538 from the NSW Stronger Country Communities Fund to undertake two major projects at Gwydir Oval to ensure it could cater for the town and region’s diverse sporting needs for decades to come.

He said the current 50-year-old amenities block, which includes player and officials’ change rooms, would be completed refurbished and brought up to modern standards to accommodate an increasing number of female participants in local sport. The iconic grandstand will also be renewed with its roof, wall cladding and bar areas being replaced.

“Gwydir Oval is the home of sport in Bingara and now it’s getting a new lease on life with a large amount of funding that will update ageing facilities,” Mr Marshall said.

“It’s one of the town’s prized community assets and hundreds of local volunteers have put in years and plenty of money of their own to achieve what they’ve got there, but now it’s pleasing to have the government kick the can for these big ticket upgrades.”

“It has done outstanding service through council, club and community support and donations and now it will be modernised again.

“It really is the focus of all outdoor sport in Bingara and the only oval the town has, so this will be money well spent,” Cr Coulton said.

“Female sport wasn’t a feature in the 60s and 70s and as a result there are poor facilities for local and visiting female teams. But that’s about to change and it’s a big winner here because the works will give them new amenities with male and female areas, a unisex disabled toilet and parent room, as well as a referee’s room.

“The project will fit in with the sporting needs of today and for the future, including for women’s rugby union competitions and also for the local Gwydir River Rats who combined with the Barraba Rams and can now accommodate home games with quality change rooms for everyone.

“Regional women’s cricket has indicated that when these new amenities are constructed, then the oval will be able to host training sessions as well. That’s another great step for Bingara’s place in regional sport, particularly with women’s cricket.”