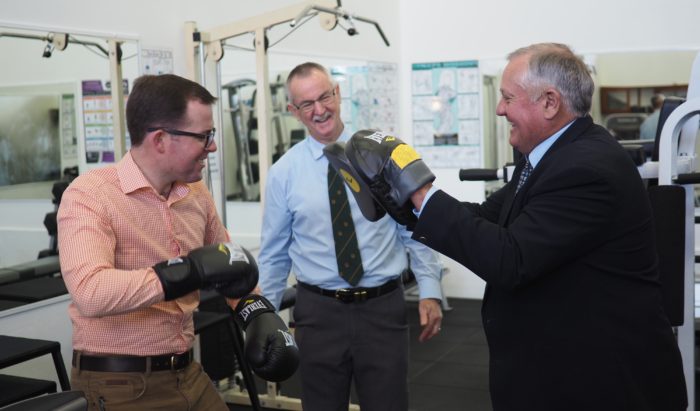 THERE has always been a self-help attitude in Gwydir Shire, and with the equipping of two 24-hour gyms, that now extends to local residents’ health and fitness.

It was built with NSW Government support after the same strategy for supporting local health and rehabilitation was used successfully in Warialda.

For a modest fee, Bingara residents get an electronic key that gives them round-the-clock access to a fully-equipped gym, aerobics area and a boxing training facility.

The gyms are intended not just to support the shire’s ‘gym junkies’, Council’s Circular Economy Manager Duncan Thain said, but to ensure older people and those in need of rehabilitation also have access to the right facilities to support their health needs.

Mr Marshall was deeply impressed with Gwydir Shire’s self-help attitude to its residents’ health and to the work invested in the Bingara gym by the community.

“I don’t think you would see this sort of thing happening anywhere else,” he said.

“The state government provided $25,000 towards this project, but residents themselves contributed about $20,000 raised by hosting an Amber Lawrence concert and holding three fun-runs and Gwydir Shire Council added another $50,000 in cash and in-kind contributions.

“This is a wonderful example of a community that knows what it needs and then goes out and gets it by drawing on every source of support it can – and it’s not afraid of losing sweat in the process.

“I’m full of admiration for the community’s achievement and the quality of the facility it has put together.”

The 24-hour gym concept was born out of necessity, Mr Thain said. A Council-owned staffed gym in Warialda was costing Council $90,000 a year and had just six financial members.

By rebuilding the gym in disused squash courts and removing staff – replacing people with electronic keys, security cameras and community goodwill – council has cut the cost of providing the Warialda gym to $11,000. It currently has around 60 financial members.

That inevitably led to questions about Bingara’s lack of a gym. Yesterday’s opening – also in former squash courts, at Bingara’s Sports Club – was the answer.

After two months in operation, it has 52 financial members, which means that the facility is not far short of being cost-neutral for the council.