HAVE YOUR SAY ON DRAFT PLANS FOR WATERFALL WAY’S FUTURE 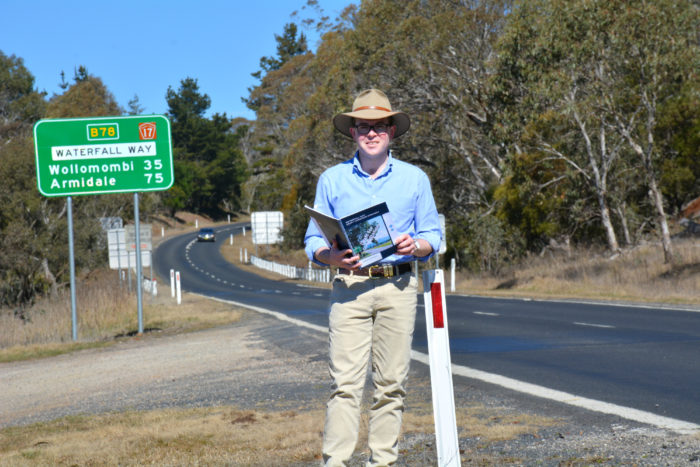 Member for Northern Tablelands Adam Marshall at the Ebor intersection of Waterfall Way, the start of a narrow and steep section of the corridor.

LOCALS have their chance to shape the future development of Waterfall Way, with a Draft Corridor Strategy on the future of the major route now up for public consultation.
Member for Northern Tablelands Adam Marshall said the draft plan would guide the NSW Government’s approach to the coastal road for decades to come.

“Waterfall Way is an important route for locals and industry, with over 6,500 travellers using it every day,” Mr Marshall said.

“With 37,000 people living on and around the route, it’s important that the NSW Government has a comprehensive plan to ensure Waterfall Way can handle a growing population and meets the high standards of safety expected from our roadways.

“This strategy sets out the issues with the Way in its current form, highlights expected challenges over the coming decades, and proposes methods to fix current and future problems.”

The 170 km road extends from the New England Highway at Armidale to the Pacific Highway at Raleigh, near Coffs Harbour. It remains a high-priority transport route, despite a crash rate almost twice as high as similar rural roads.

The draft strategy, developed for Transport for NSW, is intended as a guide for future development, and doesn’t yet guarantee a policy or funding commitment.

Mr Marshall said that transport experts had run a microscope over every aspect of Waterfall Way – ensuring the draft corridor strategy has a broad and complete scope.

“This plan highlights potential problems with narrow bridges, flooding issues, risky overtaking areas and poor road design, with a view to improve them over the next 5, 10 and 20 years,” he said.

“However, the NSW Government hasn’t just found problems – there is a comprehensive plan to address each one of these issues.

Mr Marshall encouraged road users and locals to have their say on the draft strategy, on display at his office, before submissions close on August 21.

“This road is an important access route for our region, and needs to meet the community’s high expectations for safety and efficiency.

“I encourage anyone interested in the future of this road to look at the Draft Corridor Strategy and provide feedback. This will help the NSW Government make strong, forward thinking decisions on Waterfall Way’s future.”

Feedback can be provided until Monday 21 August by emailing waterfallway@rms.nsw.gov.au, calling 6640 1300 or writing to Roads and Maritime Services PO Box 576 Grafton NSW 2460.