HEALTH, HAULAGE AND H2O HEADLINE RETURN TO NSW PARLIAMENT FOR 2022 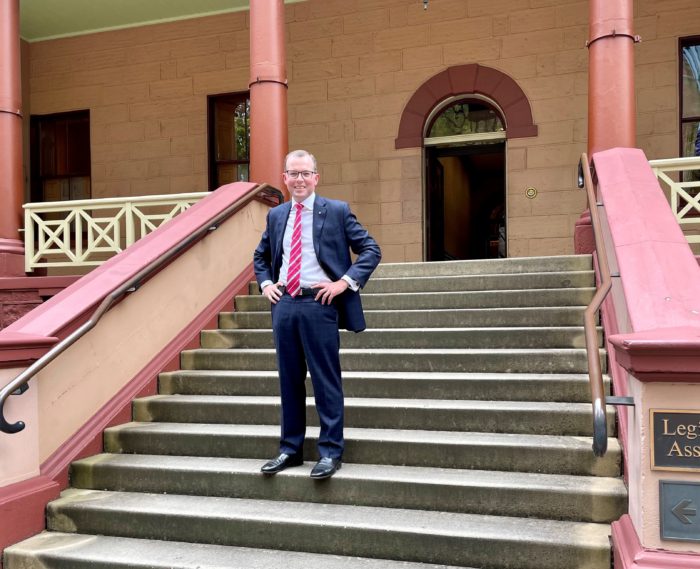 Ready to take up issues on behalf of the region – a determined Member for Northern Tablelands Adam Marshall on the steps of Parliament House as it meets this week for the first time in 2022.

HEALTH, haulage and water will headline a huge start to the NSW Parliamentary year for Northern Tablelands MP Adam Marshall, with plans this week to bring new Ministers up to speed on a number of important region shaping projects and push for more resources for the region.

Mr Marshall said he had a clear agenda to achieve as the 57th Parliament entered its final year.

“I’m really looking forward to getting back in the Parliamentary saddle this week and taking up the cudgels on a number of critical issues and project for our region,” Mr Marshall said.

“Among the many priorities I’ll be seeking clarity, and holding the government to account on timeframes for the Moree and Glen Innes District Hospital redevelopments, capital funding and constriction of the Moree Special Activation Precinct (SAP) and the long-awaited Malpas Dam wall raising project.

“As a result of the Cabinet reshuffle prior to Christmas, there is a whole bunch of new Ministers who need to be briefed and lobbied hard on these projects.

“This week I have locked in a number of meetings with Ministers and their staff, aimed at updating project timelines and pushing home the importance of this infrastructure for growing of jobs and economies in our region.

“As a matter of urgency I plan on meeting with both the Minister for Health and Minister for Regional Health, to continue discussions on strategies to overcome the doctor shortage which has now become a crisis.

“Also, with $50 million for construction of Glen Innes Hospital squared away, I now want both Ministers to come good with the next major tranche of funds to lock in the $80 million Moree Hospital build.

“It’s boom time for Moree, and with the $3.4 million Tapscott Road extension into the SAP footprint now complete, I am sitting down with the Deputy Premier to go over the next stage of works for the freight and logistics terminal, ensuring its delivery stays on track.

“The dire water situation which faced Armidale and Guyra during the drought is still front and centre in my mind – despite Malpas Dam sitting at over 100 per cent.

“I want the Water Minister to give a clear indication if he is giving consideration to a capital allocation to allow Armidale Regional Council to raises the Malpas Dam wall to double storage capacity for the region’s drinking water supply.

“I won’t be pulling my punches this week and beyond to ensure our region and our issues are front and centre for the government and we get the action and funding we need.”