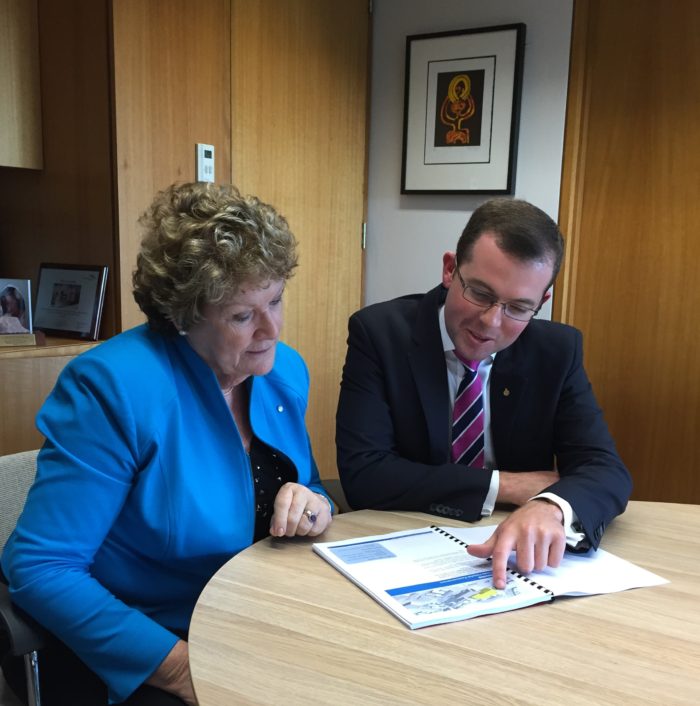 Funding for Armidale and Inverell projects locked in and ready

MEMBER for Northern Tablelands Adam Marshall has emerged very pleased from a meeting with Health Minister Jillian Skinner in Parliament, having secured confirmation of the commitments made pre-election to the Armidale and Inverell Hospital redevelopments.

In his first face-to-face meeting with the Minister since the March 28 election, Mr Marshall said it was a very positive discussion, locking in the promised funding as well as a timeframe for the projects.

“The Minister confirmed that the $60 million for Armidale Hospital and the $30 million for Inverell Hospital was locked in and set aside, ready to be allocated when the projects reached the construction stage,” Mr Marshall said.

“The Minister guaranteed that both hospital redevelopments would proceed during this term of Parliament.”

“This is the first step in the redevelopment and an essential one,” he said.

“It’s critical we get the very best redevelopment for the community that delivers increased and better health services to meet needs for the next 30 years – this starts with good planning and involving all the local stakeholders.

“As part of the preliminary planning, consultation meetings will be held with hospital clinicians, staff and management, as well as with Local Health Advisory Committee members, local doctors, Inverell Shire Council and most importantly, the community.”

Mr Marshall said the Minister advised him that the final business case for the Armidale Hospital redevelopment would soon be lodged with NSW Treasury for approval, marking one of the final steps in the pre-construction process, before work can get underway.

“This is extremely positive news as I know Armidale Hospital management and staff have been meeting recently with planners and Hunter New England Area Health to make further preparations for the redevelopment,” he said.

“We are very close now and I will continue to press for the earliest possible allocation of funds so construction can get underway without any undue delay.”

Mr Marshall said both hospital redevelopments were “absolutely vital” for the Northern Tablelands region and he was delighted the community would definitely see action soon.