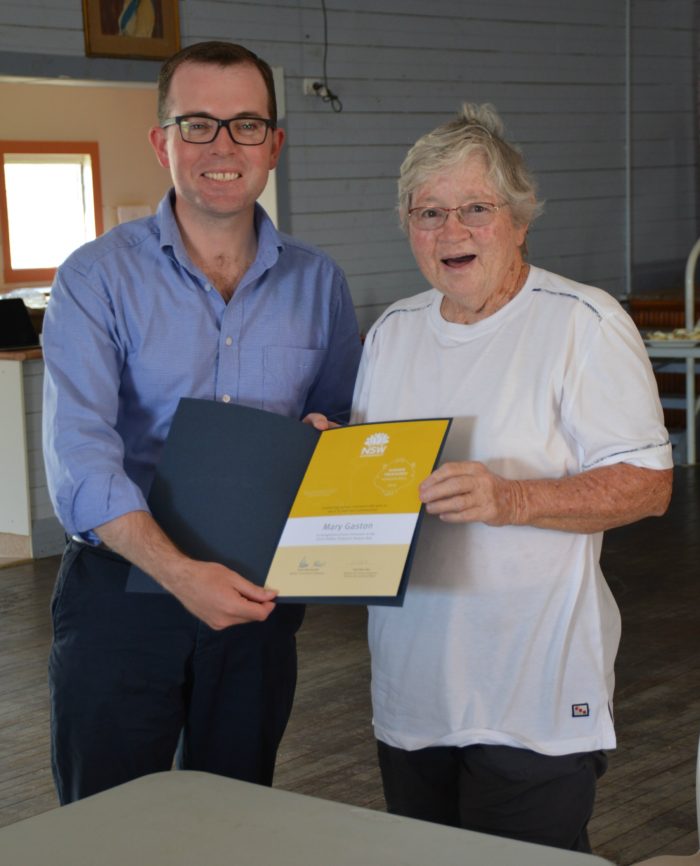 YETMAN may sometimes be described as a sleepy little community – but the town never rests when it comes to self-improvement.Few people demonstrate that better than Mary Gaston, a Kyogle native who decided to call Yetman home 43 years ago.

“Every place is what you make it. If you put a bit in, you get more out. You just do these things – you don’t think of it as volunteering, it’s just life,” Mrs Gaston said.

Throughout her four decades in town, Mary has taught dozens of kids at the local school, starting off with 25 odd years of scripture, knitting and reading lessons. After taking a well-deserved break – she’s found many kids didn’t know how to sew – and is now starting back up again.

For her constant work – Mary was yesterday presented with the Minister for Primary Industry’s award commemorating her inclusion in the 2016 ‘Hidden Treasures’ honour roll.

The award commemorates the triumph of women in smaller communities, where resources can often be limited. 90 women are bestowed the honour annually, for contribution and work that goes above and beyond.

“Going to school every week for 25 years – that’s a lot of weeks, but it doesn’t feel like it. There wouldn’t be many that I’ve missed,” Mrs Gaston said.

“You could sit at home doing nothing, but I don’t see the point in doing that. The more you put in, the more you get out – and the more friends you have.”

Mary certainly has no shortage of friends in the small town. Mr Marshall says women like Mary are the backbone of smaller towns.

“It was an honour to chat with Mary about her work and share a morning tea with her,” he said. “Even as I was describing how deserving she was, Mary was continuing to make tea for her friends – such is her dedication.

“It’s clear that the Yetman community greatly appreciates everything she does, and there’s no doubt the community wouldn’t be the same without her.

“Mary has worked for decades to strengthen the community of Yetman through education and good spirit. In smaller villages, the onus is on all to work harder to make it a comfortable place to live. Mary Gaston has taken that mantle and more”