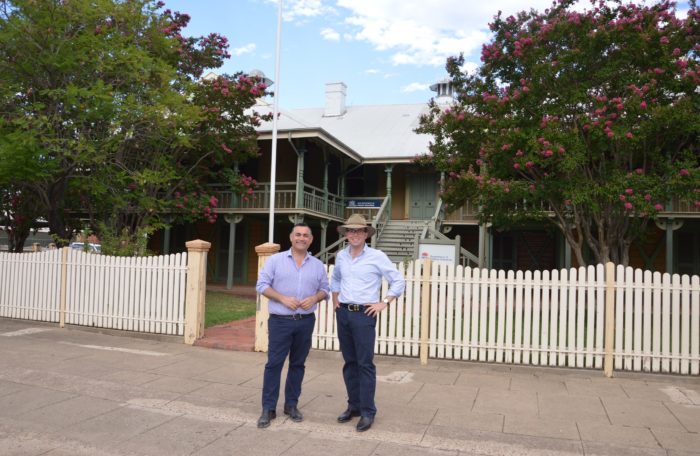 Mr Marshall said the Frome Street building has been saved from being sold off by government and he’s confident talks to see it remain as a public asset for the people of Moree are in the home stretch.

Mr Marshall said moves were underway to keep the iconic heritage structure in the trusteeship of the local Moree Historical Society.

“If the discussions are successful, then it will mean the building is held in trust by the society and its ownership remains in the hands of locals,” Mr Marshall said.

If the negotiations end as most hope, it will put an end to a long running and distressing saga that at one time threatened to see the former Lands Office and its reservoir of records put at the mercy of a commercial sale.

Mr Marshall saw red over the impasse and the whole issue in November last year and instigated the plan for preserving the records and building for locals.

“The talks now focus on how we put a permanent ownership of those records and the building itself to the historical society and it’s really all about the technicalities and official legalities of ensuring that for the future,” Mr Marshall said.

“And I had the chance to show the Deputy Premier John Barilaro the building during his recent trip to Moree and get his support for the plan.

“I was furious a couple of weeks ago when I first heard that could be moves to try and flog off the building when the five staff currently based there move up the road to the more comfortable Government Office Building in February this year.

“It was typical of some of the Sydney-centric bureaucratic views of the world – they have no regard for local history and the ownership communities feel for their beloved historic buildings.

“Due to a number of factors, the Lands Building has very little, if any, commercial value, but it, combined with the historic records held there, are priceless to the community.

“It’s wonderful that the historical society has put up its hand to be custodians of this community asset and I know they have plans to involve other groups in its space. It looks like being a win-win for Moree, for our heritage keepsakes and for community advocacy.”