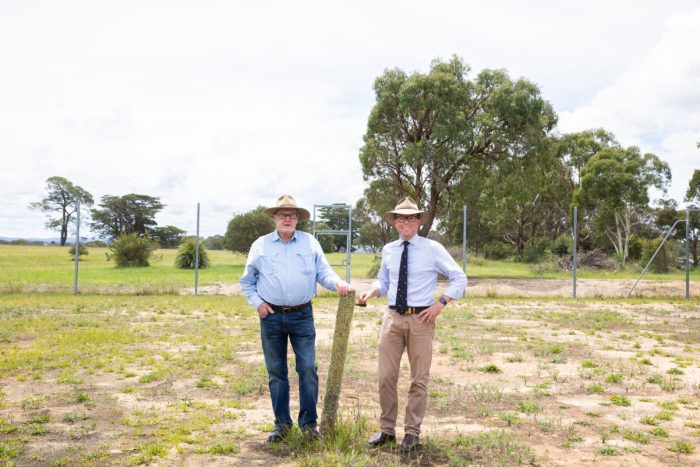 A $377,878 State Government grant has given residents in the mining village of Hillgrove reason to shout ‘Eureka’, with Northern Tablelands MP Adam Marshall today announcing the significant funding windfall to upgrade the tennis courts to a new multi-purpose court facility.

Mr Marshall said the local progress association had been ‘panning’ for grants to improve public spaces and make the village a more inviting place to live.

“While Hillgrove may never again experience the booming heights of the 1890s gold rush, it is definitely experiencing a revival as new families relocate to affordable homes and property,” Mr Marshall said.

“This grant is as good as striking gold for Hillgrove as it will allow for a full replacement of the overgrown, disused tennis ant bed courts, transforming them into an exciting synthetic grassed community hub.

“Being hardcourts there will be minimal long-term maintenance needed, meaning less demand on volunteers and chance for the site to again become overgrown.

“This project will have significant regional benefit, servicing a catchment of 350 residents from Hillgrove and the neighbouring rural areas of Metz/Argyle and Wollomombi.

“A lot of thought has also gone into including sports which meet the interests of both women and men.

“I expect once the courts are complete the sound of regular weekend tennis competitions and community get-togethers will again be heard in the village, as would have been the case in the glory days.”

“Hillgrove’s story is typical of many small towns in Australia, once it was a thriving community with active tennis, cricket and football clubs, but over the years, with an ageing population and strains on council funding, our facilities fell into disrepair,” Mr Waters said.

“For this reason Hillgrove Progress Association has been working towards renewing and upgrading our facilities to cater to the growing village and wider community.

“With such a large sum of money now available to us we want to get stuck in, hopeful of having it finished and ready to play on by October 2022.

“This tennis court upgrade is just one part of a series of planned upgrades to our village’s sporting precinct that so far has delivered new barbecues and a toilet facility.

“In the future we will be working toward a new amenities block, lighting, and playground as funding becomes available.

“We would like to thank Adam and the State Government for this significant investment in our community.”