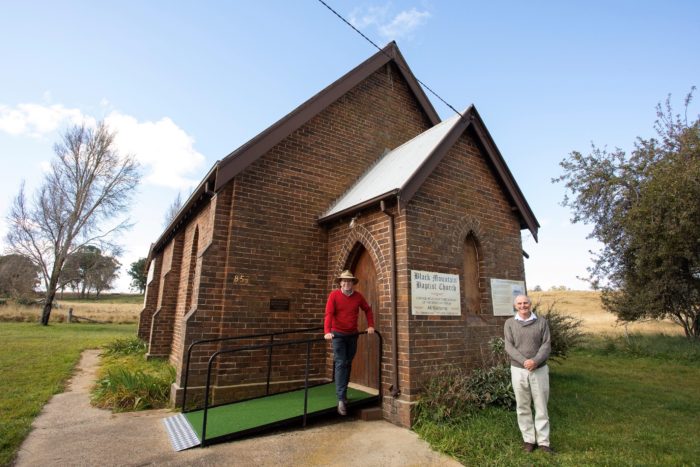 THE 118-year-old Black Mountain Church will ‘rise again’ to its former glory, with Northern Tablelands MP Adam Marshall today announcing a $53,028 grant from the State Government to refurbish the building and strengthen its walls.

Mr Marshall said the historic building had considerable religious significance for the region and was a central meeting place for the Black Mountain community.

“The church, despite it significant age, remains in a serviceable condition due to maintenance undertaken by members of the local congregation,” Mr Marshall said.

“Despite that work, years of harsh winters and the recent drought have taken a toll on the structure, with movement in the brickwork causing large cracks which allow in the weather.

“To bolster the building’s structure, this funding will replace the existing windows and allow the brickwork to be repointed, filling in the cracks.

“Parts of the outside of the church will also receive a fresh coat of paint as a way of limiting any future weather damage. Because this is a heritage building all the works will be done in a way which preserves the traditional look of the building.”

“Black Mountain’s Baptist congregation was one of the first of its kind, established in the region over a century ago,” Rev Coburn said.

“In its early years it was vital in providing financial and pastoral assistance to establish churches in other towns, including Armidale, Glen Innes and Inverell.

“Currently services are conducted monthly, with anywhere between 12 to 40 people travelling from Armidale and Guyra to attend. Getting on top of these significant maintenance issues now will mean services can continue, particularly in winter, for many years to come.

“We have already engaged trades people to undertake these specialised works, and now the funding has been secured I expect the project will get underway within two months.

“I want to thank Adam for his generous support of this project. The people of Black Mountain are proud of their little church and will be pleased to know steps are being taken to ensure it remains an active part of their community.”