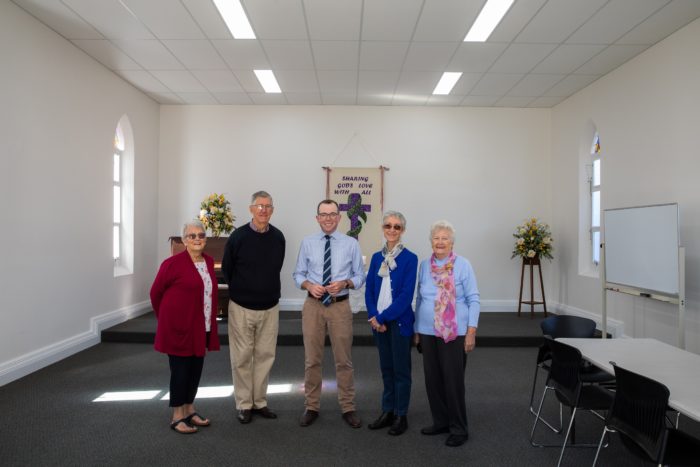 Last year Mr Marshall announced a $95,512 grant from the State Government for the project through the Stronger Country Communities Fund, while Inverell Shire Council provided an $11,500 heritage grant.

Mr Marshall said it was a very fitting time of year to be celebrating the 148-year-old chapel’s new beginning.

“Since 1873 this little building has provided a comfortable space for the Inverell community to gather and worship,” Mr Marshall said.

“Prior to the refurbishment there were fears the building would be condemned due to structural weaknesses caused by rising damp and crumbling walls.

“Through the belief and hard work of the local congregation, the chapel is now unrecognisable, with the rising damp repaired and the ceiling replaced.

“Internally, the electrical works have been updated and the aged windows repaired to include leadlight inserts.

“Barge boards outside have been replaced to stop pesky pigeons from nesting in rafter extensions and new doors have been made and installed in the portico, along with new vinyl.

“With the fresh coat of paint inside and out the building looks brand new and I have faith it is now in a state which will successfully service the community for many years to come.”

Inverell Uniting Church Chairwoman Jacki Watts said there was no doubt the work done on the chapel would extend the life of the beautiful heritage building.

“Having been built originally as a place of worship, we hope and pray the chapel will continue to be used in ways that are helpful, encouraging and safe,” Ms Watts said.

“Now the work is complete, we will be able to use the chapel for bible study groups, children’s activities, meetings of Aboriginal Elders and community groups, and with the end of COVID-19 restrictions as an examination room for university students.

“The church council wishes to extend its deep appreciation to Adam, Inverell Shire Council and Rosberg Enterprises (builder), G.D.L. Damp Proofing and Hans Mouthaan Leadlight windows for their support in the project.”