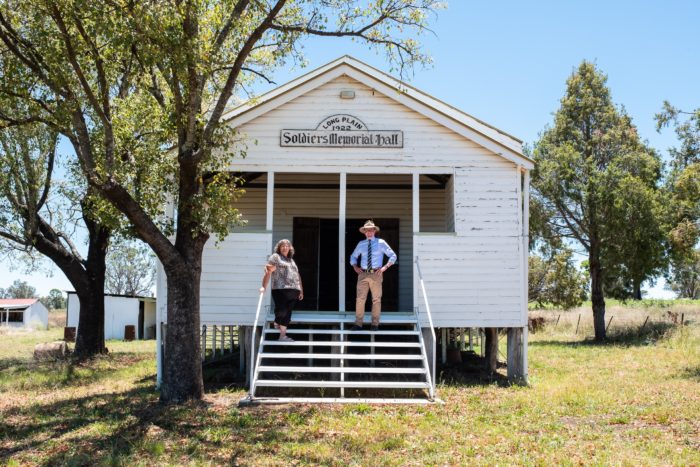 A 12-month campaign to restore the historic Long Plain Soldiers Memorial Hall has resulted in victory, with the 98-year-old building once again standing upright, proud and now accessible to the community.

“It has been such a shame that for so long this wonderful building on the Gwydir Highway has sat here unable to be used by the public,” Mr Marshall said.

“The hall had some major structural issues to overcome, including a 45-degree lean which shifted the front stairs, making them unsafe for use.

“Now, thanks to the efforts of land managers Charlies and Suzanne Baker and Bundarra builder Jeff Dezius, the hall has been righted, with new piers installed and the walls and roof strengthened.

“Front access to the building has been restored, with the installation of a new staircase, which frame the spectacular front façade, and ramp.

“Funding was also put towards updating the internal electrical wiring, digging new trenches for the toilet and updating fittings in the outbuildings.

“A long-running battle to rid the surrounding sport ground of termites is also progressing, with professional pest controllers spraying all buildings on site.

“With capacity to seat more than 100 people, I hope the Inverell community really gets behind the work that has been done here and uses the hall as a venue for birthday parties and functions.”

Long Plain Hall and Recreation Ground Trust Committee member Suzanne Baker said an open day would be held next year so the community could see all the work that has been done.

“Even though it stands right on the Gwydir Highway, many people drive past the Long Plain Hall but very few ever stop to take a look inside,” Mrs Baker said.

“On Saturday 16th January from 4pm we are giving the community an opportunity to come and explore what we feel is a true local treasure.

“Built in 1922, the building commemorates the local men and women who left the district to fight in World War 1.

“Getting the hall back to a standard which permits use for functions was really only the first stage of this restoration. Next we would like to have the inside of the hall lined and insulated and install a ceiling to assist with climate control.

“Once that is done we would then like to update the old kitchen by putting in new cupboards and lighting.

“The hall is now available for bookings and we would love to see families and community groups considering it as a potential venue for their next function.”

2022 will mark the centenary of Long Plain Memorial Hall.