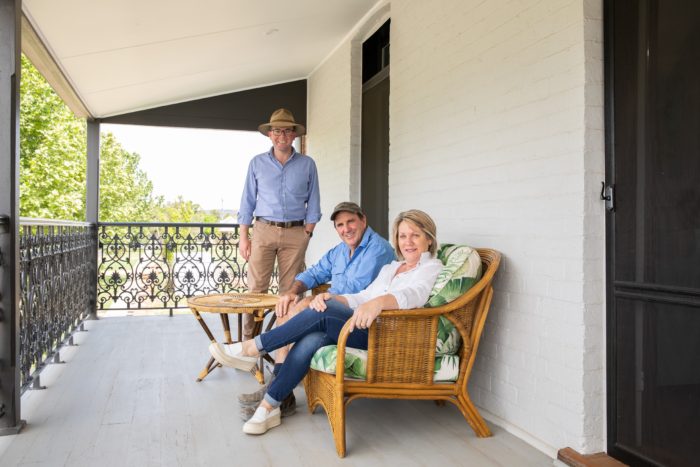 NORTHERN Tablelands MP Adam Marshall has today congratulated the owners of Inverell’s historic ‘Lyndhurst’ terrace house, Digby and Jo McNeil, whose restoration of the building, formerly known as Egan House, has been shortlisted for the 2020 National Trust (NSW) Heritage Awards.

Mr Marshall said the project to restore Inverell’s only free-standing terrace house had been an inspiration.

“The power of work which the McNeil’s have put into bringing this building back to life for the enjoyment of the community is not only a credit to themselves, but to all of Inverell,” Mr Marshall said.

“The former Egan House is a double storey Victorian terrace which was built in about 1876, as a home for Charles Egan, Inverell’s first appointed sheriff.

“It is fantastic to see the private sector standing up and taking it upon itself to restore, protect and maintain these stunning buildings, which are so much part of our local heritage and history.

“The work they have done and are continuing to do at the old convent is putting Inverell up in lights on the national stage – it’s a magnificence advertisement fo the town.

“Just being shortlisted for this accolade is a great achievement and I wish Digby and Jo the best of luck for when the award is announced in November.”

In 2018, the State Government provided a $20,000 heritage grant to assist with the restoration of the building’s front veranda.

Lyndhurst owner Jo McNeil said the nomination, and subsequent shortlisting, of the project for the National Trust (NSW) Awards was an honour.

“For our small conservation project to be considered and shortlisted is a very humbling outcome,” Mrs McNeil said.

“Rural and remote communities rarely get this level of recognition, and so we see this nomination as a chance to not only promote the love we have for these old buildings, but to showcase what the greater Inverell region has to offer.

“We hope this nomination might encourage the custodians of buildings in other regional areas to take up conservations works, so their local heritage is not lost with the passage of time.”

Projects that relate to conservation of our built heritage including capital works and repair. These projects may include buildings, structures or sites, urban precincts, commercial items, places of worship, houses, interiors, additions, industrial heritage, infill or collections.

The McNeil’s restoration recently featured on the ABC’s Restoration Australia.