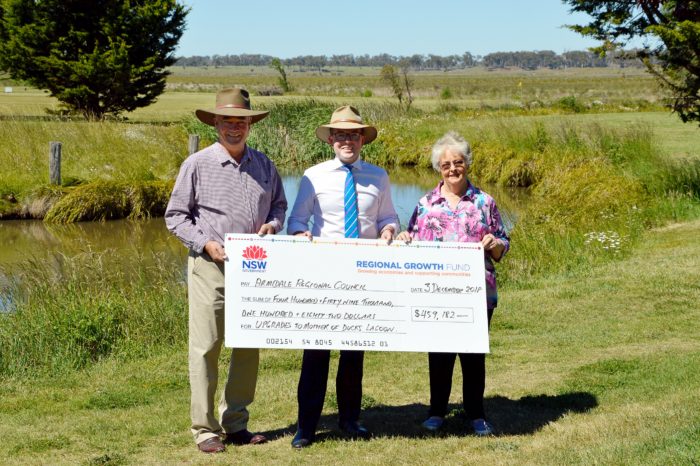 GUYRA’S Mother of Ducks Lagoon and Nature Reserve is a much-loved recreation space for locals and an important attractant for tourists and now it will undergo an almost $460,000 upgrade, Northern Tablelands MP Adam Marshall announced today.

Mr Marshall said the $459,182 grant from the State Government’s Stronger Country Communities Fund would ensure the lagoon’s natural beauty remained undiminished and the community facilities were upgraded for the future.

“The Mother of Ducks Lagoon and Nature Reserve is one of the most beautiful public park areas in the Guyra district – it is truly one of our tourism gems,” Mr Marshall said.

“The reserve is rarely empty, with locals and visitors coming here to enjoy the stunning natural vista which even in our current dry season is still a beautiful sight.

“It’s also well patronised by visitors, particularly the grey nomad and RV tourism sector and in summer its common to see up to 20 vans parked here each night.”

Created as part of an Australian Bicentenary project in 1988, Mr Marshall said many of the lagoon’s facilities were looking old and tired.

He said the toilet block was too small for the numbers of visitors the lagoon attracted, there were not enough shade shelters, the interpretive signage required updating, the walking tracked were desperate for improvements as well as a need for public barbecue facilities.

“All of these deficiencies take away from what could be Guyra’s key attraction which is why I got right behind Armidale Regional Council’s upgrade plans for the reserve and I’m delighted that we now have the money to get the job done,” Mr Marshall said.

“New electric barbecues, weather-proof picnic tables, a brand new amenities block, signage and expanded walking tracks will be built to enhance the attractiveness of the lagoon reserve to tourists.

“With even a small two per cent increase in overnight stays at the lagoon reserve, Guyra has the ability to increase visitor expenditure in the town by almost $2.75 million each year.

“People will stay, shop, have breakfast, buy local produce and take advantage of other sites around the area.”

“The planned upgrades at the lagoon were identified as a key priority by the Guyra community and council is really pleased to be able to start this work early in the New Year,” Cr Murray said.

“It will be wonderful for Guyra and our local businesses, which will benefit the most from extra visitors.”