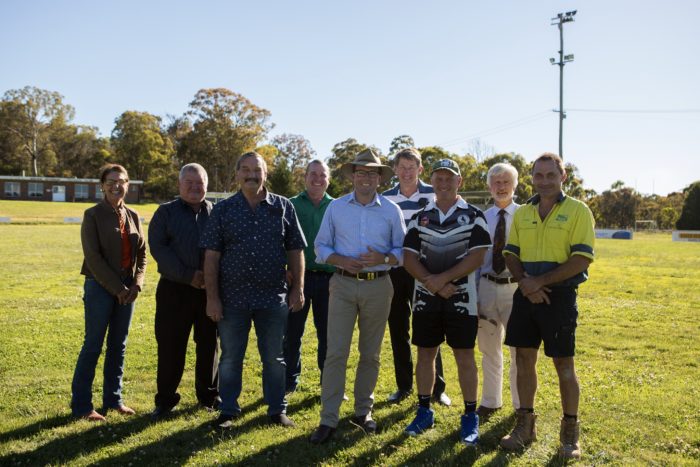 THE home of rugby league in Glen Innes is set for it’s largest revamp in decades with a new $471,770 State Government-funded game plan that will upgrade and expand the existing complex, announced today by Northern Tablelands MP Adam Marshall.

“This is a tremendous home ground boost for rugby league in Glen Innes,” Mr Marshall said. “These new and upgraded facilities will secure the future of the sport locally for many years to come.

“There’s around 160 juniors who use Kerry Mead for minor league and it’s also the base for senior rugby league, women’s league tag and the Glen Innes Magpies, who were beaten in the Group 19 grand final last year, so it’s very much rugby league central here.

“The minor league competition last year had eight teams involved and about a third of those players were young girls but the present day amenities don’t reflect the new age of football where young women are part and parcel of play, so this upgrade is well overdue and necessary.”

Glen Innes rugby league spokesman Wayne Williams, who is a grants officer for both the junior and senior ranks, says the funding is a great result for rugby league and for Glen Innes.

Mr Williams said aside from giving the code a great new modern venue it would importantly resolve gender equality issues – with new separate change rooms and toilet facilities for girls and boys and those with disabilities.

“But it’s absolutely fantastic that this funding will go towards the new amenities so we have the ability to have separate areas for boys and girls.

“It’s going to be fantastic and it couldn’t have come at a better time. We are the only club in the group which runs both junior and senior clubs at the same ground; that’s a big deal.”

Outside, on new ground for the new fields, which will be used initially as training fields, the upgrade will include the removal of debris, laying and levelling of top soil and subsequent seeding.

“The project will also see the installation of irrigation to secure water and drainage to the fields,” Mr Marshall said.

“It’s a huge result for minor and senior rugby league, who have a great partnership and share the same home base and grounds which is pretty unusual when it comes to rugby league competitions, but it also sets the groundwork for touch football to pick up the ball and switch to Kerry Mead.

“Touch has been operating out of Wilson Park, which itself is set to see a $5.5 million upgrade to make it a multi-sports precinct courtesy of over $4 million from the State Government, but it will move back to the rugby league base when this project is completed.”

That move will see tag, touch, and the tackle disciplines of rugby league in one mega-home base.

“It will make it a lot more attractive for more girls to join the sport,” Mr Lonergan said.

Mr Marshall said the latest financial boost for Kerry Mead was in step with the Glen Innes Severn Council’s master plan for sport for the town.