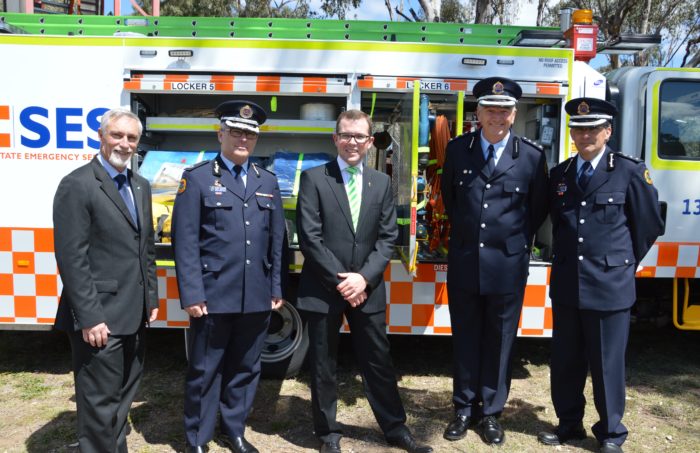 Mr Marshall said the new state-of-the-art vehicles – a medium storm truck for Inverell and Ford Ranger 4WD for Ashford – would greatly assist both units tackle future storm seasons and associated emergency situations and allow them to continue to meet SES operational needs in the region.

In handing over the new emergency response vehicles to the volunteers Mr Marshall thanked them for their dedication to their communities and congratulated the NSW SES on the standard of the vehicles.

“The storm response truck design is the result of hard work and collaboration between the NSW SES and its members to ensure that SES volunteers have vehicles that are safe, responsive and best meet their needs in responding to emergencies and disasters,” Mr Marshall said.

“This truck, valued at just over $200,000, is one of only 13 medium storm emergency response vehicles to be provided in this round across NSW as part of the State Government’s new vehicle roll-out.

“I also acknowledge and thank Inverell Shire Council for its financial contribution and continuing support of its local emergency services.”

“These vehicles will prove invaluable in helping the volunteers to respond even more effectively to emergencies in their communities. The storm truck design sets the benchmark for similar vehicles across Australia,” Mr Galvin said.

Key features of the storm response truck include seating for six occupants and the ability to carry 700kg of equipment. The body has been designed with safety as the top priority. The trucks have a Teklite light mast that extends to six metres and comes with wireless remote control ensuring lighting during night time operations.

The NSW Government committed $46 million over five years to the Centrally Managed Fleet Project in 2012 to ensure the SES fleet is safe, well maintained and fit for purpose.

The project – the largest in NSW SES history – has resulted in the agency acquiring ownership of all its operational fleet from local councils to improve safety and reliability for volunteers, as well as designing and procuring the new storm trucks.