INVERELL BACK IN THE AIR WITH DAILY SERVICE TO BRISBANE 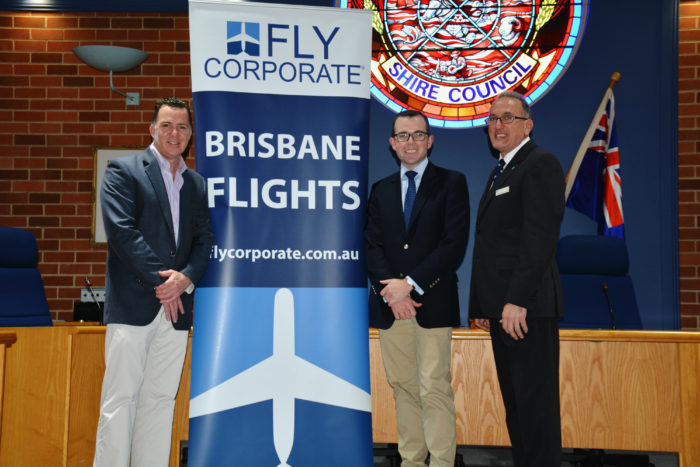 INVERELL’S time has come according to Northern Tablelands MP Adam Marshall with an announcement today that the burgeoning regional centre will see a daily air service to Brisbane arriving from September this year.

Mr Marshall today joined representatives from Fly Corporate and Inverell Shire Council to announce that tickets for the Monday to Friday return service will go on sale from tomorrow.

“This is truly brilliant news for the Inverell community,” Mr Marshall said. “Whether you’re in business, a tourist operator or needing access to interstate or international flights everyone will benefit from this air service.

“Inverell has working hard to attract an air carrier, since the collapse of Brindabella almost four years ago, which meant many regular travellers needed to drive to Armidale or Moree to fly commercially.

“A regular air service is an essential component of a regional community that’s on the move and I congratulate Inverell Shire Council and the business chamber’s Air Service Working Group on their efforts, which have paid huge dividends today.

“With a clear demand from the Inverell community, the business case was undeniably strong and I’m glad that Fly Corporate has responded with such a suitable and sustainable investment.”

Mr Marshall said the 19-seat Metro 23 turbo-prop aircraft would depart Brisbane each morning, touching down in Inverell first and then on to Moree.

“This regularity will be greatly appreciated – with the triangulation of the route ensuring it’s financially sustainable well into the future,” he said.

“With well-established routes to Moree, Armidale, Tamworth, and Narrabri, Fly Corporate will give the Inverell community a sense of reliability and permanence that it has been lacking for years.

“This is important not only for travellers, but also a tangible sign that Inverell has definitely arrived as a community and removed one of the final barriers to continued growth.

“Having a regular air service not only saves three hours on a trip to Brisbane, but it also sends the message to the business community that Inverell is a growing town that offers a vibrant economy.

“I’m very confident the service will be well utilised and as the demand and the community grows, I’d like to see further routes offered.

Mr Marshall said that with today’s announcements, now more than ever before, regional communities needed the Federal Government to relax its arbitrary and unnecessary over-regulation of Sydney’s Kingsford Smith Airport.

“The artificial caps at Sydney Airport have meant that new regional airlines and communities cannot get access during the peak morning and evening periods,” he said.

“With the stroke of a pen, the airport could cope with many more aircraft movements during peak periods, which would in turn provide opportunities for communities like Inverell to get a look in.

“At the moment, without any change, Inverell and many other communities like it will continue to be denied access during the optimum times.”

Wednesday, 27 May 2020 MOREE’S Aboriginal community has lost one of its most prominent advocates with Northern Tablelands MP Adam... Read More