INVERELL BASKETBALL STADIUM FLOOR GETS ITS BOUNCE BACK 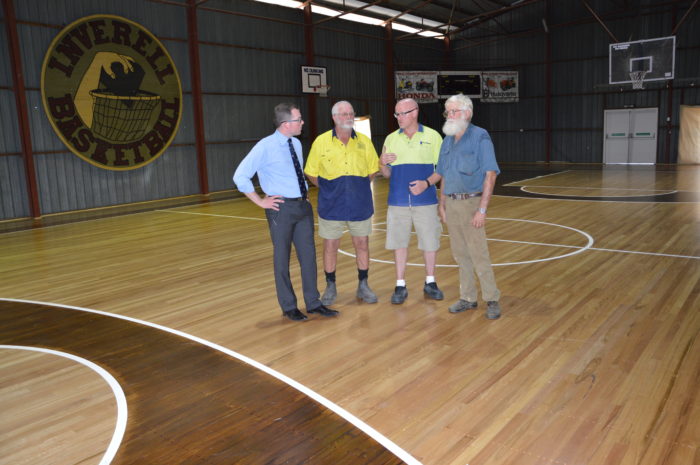 THANKS to a $157,546 grant from the State Government, the Inverell showground’s main pavilion, the basketball stadium, now has a brand new timber floor one and the Inverell Basketball Association couldn’t be happier.

Northern Tablelands MP Adam Marshall was in Inverell today to inspect the new floor and said he was thrilled the project was now finished and ready in time for the Inverell Show and basketball season.

“The Inverell Showground Trust does a wonderful job maintaining the showground but this project was a little beyond their reach, so I was delighted that through the Public Reserve Management Fund, we were able to secure the grant,” Mr Marshall said.

“The new floor certainly has the ‘wow’ factor. It looks great and feels like a brand new facility; it will be well received by all user groups and possibly lead to a renewed interest in basketball in Inverell.

“The old floor was built 50 years ago and for safety reason need to be replaced – it was old and dilapidated and was so bad, nails were being hammered back into boards half way through a game. There was also the added concern players could fall through the floorboards in certain spots.

“The local builder, Matthew Black, has done an excellent job. The funding was approved in August last year and here we are about to christen it. I’d like to commend the showground’s trustees and the basketball association for working in partnership to see this project through. It’s a wonderful result.”

Inverell Basketball Association President Tane Richards said he was thrilled with the end result and thanked Mr Marshall for his support.

“It’s just very exciting to have this new floor; it was well overdue. There are about half a dozen user groups so we are all going to benefit from this facelift,” Mr Richards said.

“Basketball has had a bit of a resurgence in the past few years so we’re hoping this new floor will be a big attraction and keep the players coming back. We are very keen to build on our numbers in the junior ranks and women’s basketball.

“To celebrate the floor’s completion, the basketball association has organised a round-robin competition this Saturday with Tamworth, Glen Innes and Tenterfield. It will be great to get on court.”

Mr Marshall said this funding had been on the back of more than $85,000 received in 2014 by the Trust for improvements works around the showground.

“By supporting these vital projects the NSW Government is supporting the role our volunteer managers of Crown reserves play in the ongoing management of vital community assets for the enjoyment of thousands of people each year,” he said.

The upgrade of Moree Artesian Aquatic Centre (MAAC) will kick ahead with thanks to a $999,358 State government grant,... Read More