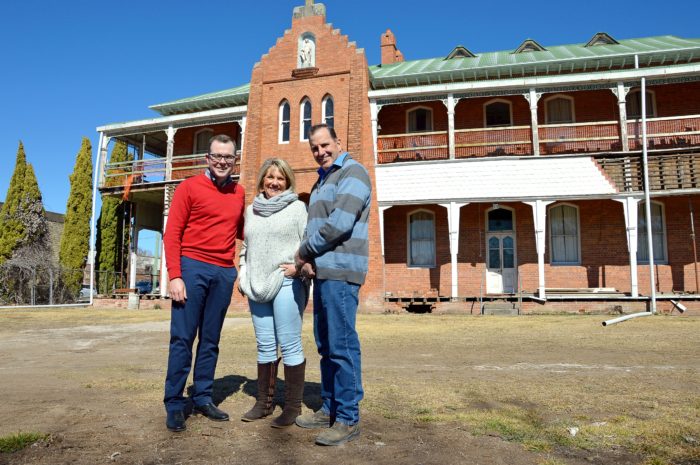 NORTHERN Tablelands MP Adam Marshall has announced a $100,000 NSW heritage grant to go towards the renovation of the historic former Sisters of Mercy convent building in Inverell, designed to help it return to its grand old glory days but in a modern context.

Mr Marshall joined Inverell business couple Digby and Jo McNeil yesterday to announce the funding and outline some of the exciting plans they have for the two-storey convent and neighbouring two-storey residence.

The McNeils estimate their bold renovation dream might cost them $2 million – and the State Government grant is a great boost.

“$100,000 towards that cost might seem small, but it’s better than a poke in the eye with a blunt stick – no, it’s really great and a vote of confidence in the long road for what we want to achieve,” Mrs McNeil said.

After touring the project site, Mr Marshall described the grand plan as outstanding.

“It’s an absolute gem,” he said. “What the McNeils are doing here is not only historically important but also tremendously exciting for the future of Inverell and the economic and social future of such a progressive town.

“Ït’s incredibly significant and so impressive. I love the idea of what they are doing; it’s an ambitious plan that echoes the heart and soul of a town and a community that treasures its past and is a true commitment to its future prosperity.”

Mr Marshall said the Heritage Near Me Activation grant awarded to the developer and owners of the convent and its associated caretaker’s residence beside it would ensure the restoration of the complex and bring local heritage to life.

The McNeils also provided a background profile of the site which traces its heritage place in the history of Inverell.

The convent was built in 1908 in Vivian Street by the Sisters of Mercy as their home while they taught at the local Catholic school.

In 1922 they also bought the neigbouring Egan House, a double storey Victorian terrace, which had been built in about 1876 for Charles Egan, one of the first sheriffs in Inverell.

Egan House was used as a boarding house for boys and when it was outgrown they bought the building beside it.

According to Mrs McNeil, the convent was sold and vacated by the nuns around 1980 and remained vacant for a while before taking on a new role as Ireby House, a home for people with intellectual disabilities.

It did duty as that home until about 1999 and then had another period of vacant possession before being sold to an American attorney who used it as a holiday base for a couple of years. It was only after his death in October 2016 that it came back onto the property market as a deceased estate.

“Digby and I thought, oh well, we like a challenge, we thought it would be really horrible if it wasn’t ought by someone who didn’t respect that history and treasure it,” Mrs McNeil said.

“Some people have a midlife crisis and go out and buy a Harley Davidson, we bought a convent.”

Work has been underway this year, with a building team of three, soon to be four, with major works to underpin some structural and environmental works and rotting framework, especially to shore up the verandahs and posts, before the actual renovation begins.

Mrs McNeil said the building had been in very bad repair, suffering the effects of some 110 years of watering running down downpipes and the heavy wrought iron on the verandahs adding to the weight and subsidence.

Mrs McNeil says they plan to turn the old boarding house into residential accommodation with four apartments, to complement the convent renovation.

“It will be a two-year plan realistically,” she said, admitting they might have to jump through lots of hoops to get all the planning permissions involved.

“A lot of people have said we are mad, ‘haven’t you got anything else better to throw your money at’, but plenty of others have said, ‘Thank God, you guys have bought it’,” she said.

The buildings are an icon in the Inverell architectural landscape, and a high profile mid-town site, with busloads of tourists regularly stopping at its location across from a main park.

“It’s just a beautiful building, and hopefully if Egan House is finished in a couple of months it will be our showcase piece,” Mrs McNeil said.

Mr Marshall said much of the grant funds will be used to construct disability access to the convent, which is necessary for future public access and permissions, but will also go towards some of the verandah repair to comply with current building standards.

Photo caption: Northern Tablelands MP Adam Marshall, left, with Jo and Digby McNeil in front of the 110-year-old Sisters of Mercy Convent which the couple are restoring.