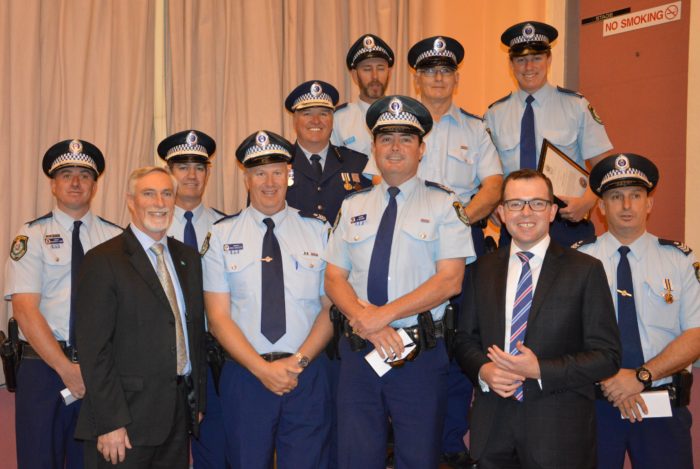 Among the more than 50 serving and retired officers from right across the local area command were those from Inverell and nine officers from that station attended the awards presentation.

Among them was a commendation to Inverell-based Constable Shaun Phillips for outstanding courage.

“Constable Phillips was patrolling an area around Toongabbie in Sydney a couple of years ago with a colleague when they came across three males near the Toongabbie Hotel,” Mr Marshall said.

“Shaun pursued one of those men to the top of the roof of a building in the pouring rain where one dropped a gun, knife and balaclava, and police have no doubt that those actions of Constable Phillip’s helped in preventing an armed robbery.”

“It’s the dedication of people like Shaun and others from Inverell that makes our police the force that it is in keeping our communities safer.”

Mr Marshall also paid tribute to other Inverell-stationed officers including sergeants Darren Wilkins and Tim Mowle, who were presented with their National Police Service Medal, Sergeant Warwick Laing with his National Medal, and Sergeant Andrew McKay for his national medal plus clasp which marks 25 years of continued diligent service and also with his NSW police medal for 25 years’ service.

Senior Constable Howard Jones of Tingha was presented with a fourth clasp for his state medal to mark 30 years. Sergeant Ross Chilcott received his second clasp to his medal for 20 years of service and senior constable Steven Harris was presented with his medal marking 10 years.

Mr Marshall said the ceremony was a true reflection of the respect the force had for its officers and a commendable way of celebrating the principles of honesty, integrity and work ethic that made the police “family” such a powerful force in each other’s lives.