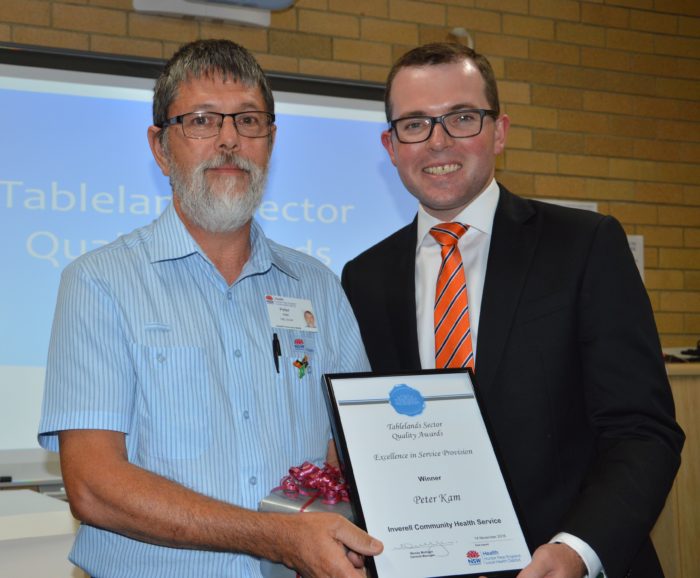 INVERELL has taken out three of the prestigious awards for the Northern Tablelands health service cluster for this year, including for staff initiatives and individual service and for volunteer work.

Northern Tablelands MP Adam Marshall presented the awards in Armidale on Monday to health professionals across the region including to nursing and staff team leaders, project designers, volunteers and consultants for the best of programs and people from the Inverell, Guyra, Glen Innes, Armidale and Tenterfield health areas.

One of these was for the Inverell hospital’s West Wing initiative for excellence in staff service which was a ‘hand-health’ campaign to promote better hand hygiene and infection control.

“This included catch phrases and even decorating the wards with balloons and bugs and germs and it got incredible results,” Mr Marshall said.

“These included improvements that took them from below-benchmark standards to very high percentage increases in infection control.”

The winner of this year’s individual staff excellence award also went to Inverell – and to clinical nurse consultant Peter Kam for his work with the Integrated Chronic Care for Aboriginal People project.

Mr Kam said while the first priorities were the clients, the key to great results had been the input from other team members and while it was his job to ‘close the gap’ it was the job of staff to do that too.

The individual winner for the award for service provision for volunteers also went to Inverell.

Leanne Michael was named the winner for her fortnightly publication of the Inverell hospital newsletter which was launched in November 2014 which provides stories about good news events, staff movements, equipment upgrades and people profiles.

The basic re-build or a simple building procedure to the Inverell day surgery unit to streamline service delivery was a finalist in the Collaborative Team award category and accepted by plumber Russell Robinson.

The Inverell Community Health team was also a finalist in the awards for improving quality and safety for their redesign of the wound clinic and the Inverell hospital catering department was a finalist and highly commended in the team excellence in service provision award, won by colleagues for their West Wing project.

Mrs Mulligan said while it was very difficult to choose winners, the finalists nominations displayed exceptional service provision programs and she was very proud of all the staff who had participated.