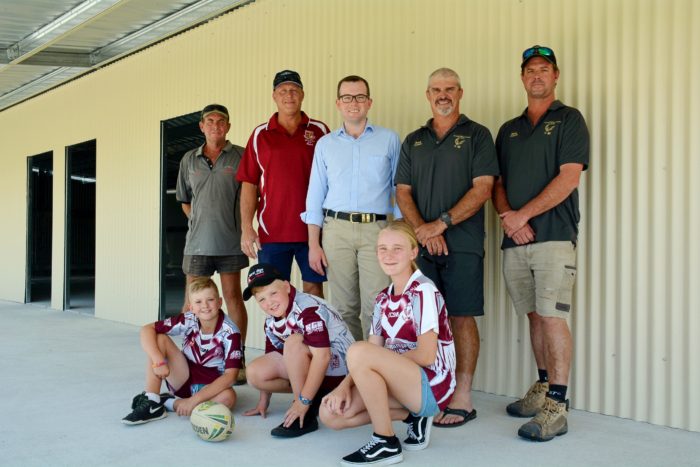 INVERELL’S Minor League Hawks have scored a try in the opening minutes of 2018, securing a $50,000 NSW Government grant to complete new change rooms and amenities at their Kamilaroi Oval home ground.

“Inverell’s Minor League Hawks is a growing force in the Group 19 rugby league competition, now with more than 160 male and female players on the paddock every weekend during footy season,” Mr Marshall said.

“The club’s resurgence in recent years and the influx of junior female players has forced officials to upgrade their old and cramped change rooms and amenities to provide appropriate spaces for players and match officials to change and prepare for games.

“Parents and sponsors have been working hard to get around this problem, starting work on slick new facilities out of their own pocket, before hitting a funding brick wall.

“This $50,000 will enable the club to keep that momentum going, finishing the new building before the upcoming season.”

“These spacious new rooms are a huge upgrade to current amenities and will finally give the female players a place of their own,” Mr Marshall said.

“Over time we’ve had a lot of materials donated – people giving us really good deals on cement, steel and clothing,” Mr White said.

“This funding was a real lifesaver and will allow us the finish the project and help the Hawks attract more players to their girls’ side. We’re bringing in another age group for the girls – there’ll be three next year for the first time.”

“We’re very grateful for the funding which will mean our club can offer a standard of facilities for players and referees which you have to have these days.”