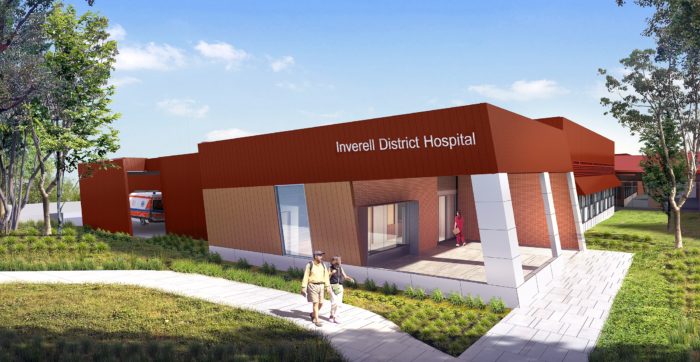 This early artist’s impression of the Inverell Hospital Development depicts the main entry and ambulance bay.

FUNDING is locked in, community meetings are around the corner and now the Inverell community can cast its eyes over the latest design for the $30 million Inverell District Hospital redevelopment, Member for Northern Tablelands Adam Marshall announced today.

Mr Marshall said the designs, drawn up by NSW Health Infrastructure, demonstrated the exceptional attention to detail taken in planning the redevelopment.

“This first tantalising glimpse of Inverell’s hospital of the future gives the community and opportunity to see what the redeveloped facility will look like,” Mr Marshall said.

“From the outset, it’s clear that it will blend in with the existing structures, with a modern design approach ensuring the future Inverell Hospital will be an exceptional place to work, attend surgery or recover from illness.

“After a decade of pushing for progress on this much-needed hospital upgrade, I know the Inverell community to be thrilled to finally see plans in the flesh.”

Mr Marshall said the fly around video would join detailed schematic designs at the upcoming community information sessions at the Inverell Club later this week.

“I’d encourage any interested members of the community to join me in the drop-in information sessions held on Thursday and Friday,” he said.

“During these two sessions, project team leaders will be available to answer queries or concerns about the development, and the feedback received may help guide the construction of Inverell’s new health service.”

A fly around of early designs for Inverell’s $30 million Hospital Redevelopment is available on Youtube: https://youtu.be/ElsqDrN5wnY