INVERELL HOSPITAL REDEVELOPMENT MOVES AHEAD TO NEXT STAGE 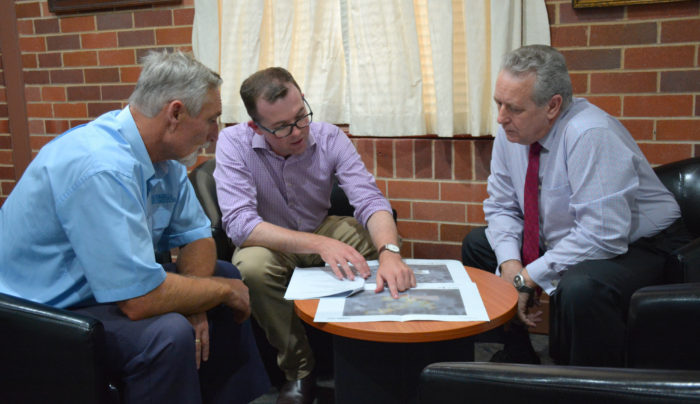 PLANNING for Inverell’s $30 million hospital redevelopment has moved to the next stage – at break-neck speed – with the final business case recently submitted to the NSW Government for consideration, Northern Tablelands MP Adam Marshall announced today.

“Since receiving $1 million in planning funding in this year’s (2016/17) State Budget, the planning process for the redevelopment has progressed quickly,” Mr Marshall said.

“This has been very deliberate, as I have been applying the pressure to Hunter New England Health and NSW Health Infrastructure to complete all the planning well before the end of the financial year, so I can be in a position to lobby the government for the first chunk of the $30 million to start construction this calendar year.

“This is much quicker than the same planning process for the ARMIDALE hospital redevelopment, which is now well into construction after receiving $26 million in the last budget and I want to see the same for Inverell occur very soon.”

Mr Marshall told council that the final plans and business case had been submitted via the NSW Treasury, where large capital projects are scrutinised to ensure calculations and costings are accurate and that the community will get best value for money.

“This is a very exciting stage and once formally signed off, all the planning and design work can be shared with the community so everyone can see what will be built and how the redeveloped hospital will service the health needs of this community now and well into the future,” he said.

“Hunter New England Health CEO Michael DiRienzo has agreed to my request to hold a public information session about the redevelopment, once the business case has been approved and there will be an opportunity to ask questions of the NSW Health Infrastructure experts as well.

“I’m incredibly excited about this redevelopment and can’t wait to show the community the details.

“Having been through this process with Armidale, I can assure the Inverell community that they too will be impressed with the final design and hospital construction.”

Mayor Paul Harmon said it was he was pleased to see progress on the redevelopment and looked forward to the plans being released to the community.

“It was great to catch up with Adam and get an update on the progress of the Inverell Hospital redevelopment,” Cr Harmon said.

“I’m very impressed and I’m sure that the community will be delighted with the new hospital. We know the business case is before treasury at the moment, we’re excited about the announcement.”

The redeveloped hospital is proposed to include the following services in a new building:

“The community has campaigned relentlessly for more than a decade for this redevelopment and I’ll will continue to work hard to ensure its successful delivery,” Mr Marshall said.

“This project is my number one priority across the electorate.”

Mr Marshall will shortly write to every resident of the Inverell district to provide them with an update on the redevelopment, once the business case and plans have been approved.