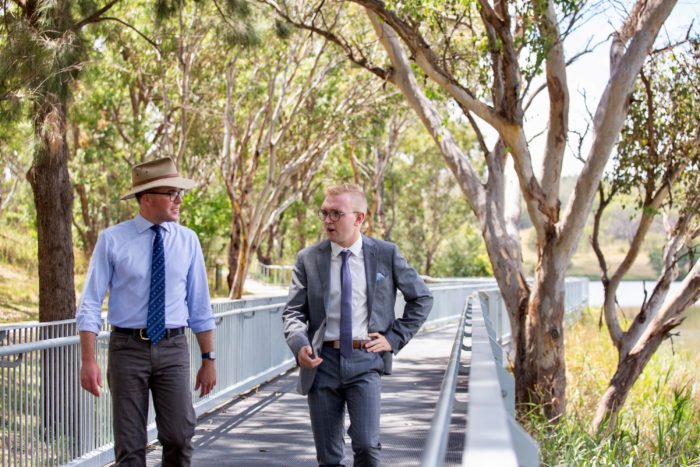 ONCE again Inverell will have a voice and a seat at the table on one of the State’s leading youth advocacy bodies, with former Macintyre High School student Rohan Cowley selected for the 2022 NSW Regional Youth Taskforce.

Member for Northern Tablelands Adam Marshall caught up with Rohan to congratulate him and said Rohan was thoroughly deserving of his appointment to the third-year-cohort of the Taskforce.

“The NSW Regional Youth Taskforce program was established in 2020 to provide a platform for young people across regional NSW to advocate for their communities,” Mr Marshall said.

“Rohan is an outstanding young man and will be excellent representatives for our region and his peers.

“As an athlete in pool, volunteer and member of APEX, Rohan has a real understanding of what services young people require to be engaged and active participants in their communities.

“Through quarterly meetings, the Taskforce allows young people to inform government on important youth issues across the regions and offers a unique opportunity to work together to improve outcomes and deliver better services for rural and regional NSW.

“I really look forward to hearing the strategies Rohan puts forward which support the State Government in addressing the wide range of issues impacting young people from the regions.”

Rohan follows in the footsteps of Inverell’s Imogen McDonald, who sat on the taskforce in 2021.

“I would just like to say what an honour it is to be given the opportunity to represent the youth of Inverell on a state level, and be a voice of change and awareness,” Rohan said.

“By participating in the NSW Regional Youth Task Force I hope to gain leadership, team work and delegation skills and better my ability to identify issues that affect my local area and regional NSW.

“I hope to be able to convey the experiences of Inverell’s young people and bring to the table the issues which concern us.

“I believe it is important to have a voice no matter geographical location.

“I would like to thank my former principal Lindsay Paul of Macintyre for every opportunity he’s presented to me that led to my application and acceptance into the Taskforce.”