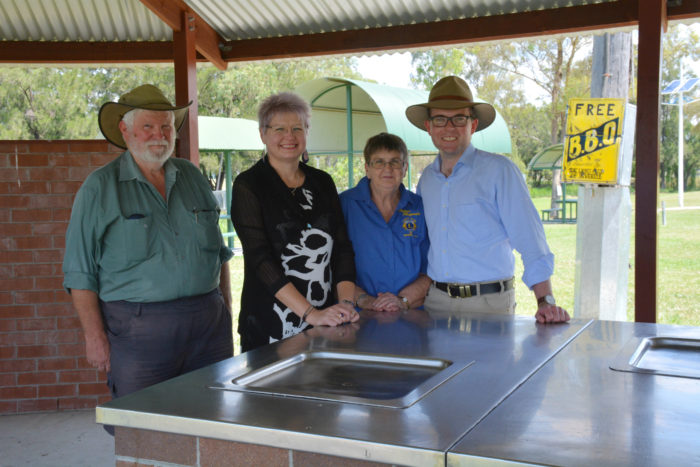 THE banks of Inverell’s Macintyre River will be filled with the smell of sizzling steaks and sausages, with the NSW Government providing a $5,654 grant to bring a spark back to the Inverell Lions Park barbecues.

Member for Northern Tablelands Adam Marshall announced the funding this week and said while the well cared for Lions Park was looking better than ever, most of the weary barbecues had cooked their last meal.

“These barbecues have served the community well, serving thousands of happy parkgoers over their 25 years of service,” Mr Marshall said.

“Unfortunately, now three of the four barbecues have given up the ghost, with the sole survivor proving a hot commodity during Inverell’s lovely summer days.

“This funding will allow the Lions Club to replace two of the barbecues, with the club to fund the fourth, bringing the park back to full capacity again.”

The club has already had an electrician out to plan the replacement and the work is expected to be completed in the next six weeks.

“Situated close to the highway, boasting a cool river breeze, and with recent improvements to amenities and greenspace, it’s a great place to spend an afternoon,” Mr Marshall said.

“With 2017 celebrating the centenary of Lions Clubs across the world, this funding will help our local club move into their next century reinvigorated and ready to cook.”

Inverell Lions Club secretary Sonya Lange said the Club had been working hard to upgrade the garden and pathways.

“It’s certainly made it much more appealing, particularly with the new play equipment – so families can come down and play, cook up on the barbecue and have a great day,” Mrs Lange said.

“Particularly at this time of year when the light is perfect in the evenings – it’s a really great way to spend time.”