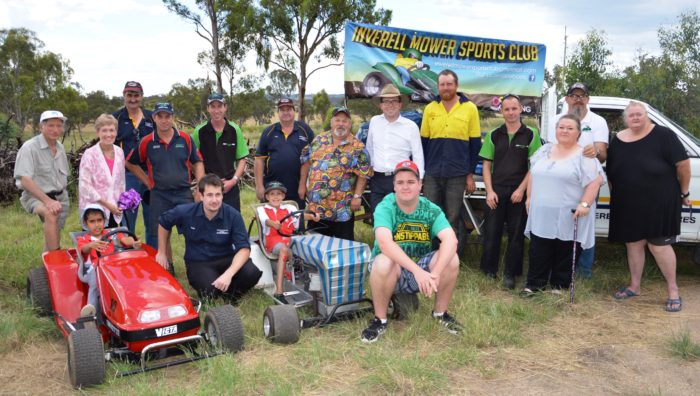 THE Inverell lawn mower club is celebrating a cash injection that will put them on the starting grid to become the first licensed club in NSW – and host competition racing in lawn mowers on a dedicated flat track from early in 2017.

Northern Tablelands MP Adam Marshall has delivered a great Christmas present to the club, according to secretary/treasurer Steve ‘Jacko’ Jackson, that not only gets it into gear to take off racing but also probably saves them from extinction too.

The Inverell Mower Sports Club will use a $15,000 grant from a State Government program to convert an old go-kart track on the Ashford Rd at Inverell into the first 330 metre lawn mower track to be licensed in the country.

“We’re just so damned grateful for this funding because you know Inverell is a real sports town; there’s every sport here and while there’s great support, there’s only so much in the cookie jar when it comes to raising money from locals,” Mr Jackson said.

“Our members have been buying their own raffle tickets and eating the sausage sizzles too like a lot of us do and I don’t know if we would have survived another year without this funding through Adam’s hard work.

“We’ll put our pedal to the wheel now and get down to the job of getting the track ready for racing in a couple of weeks.”

Mr Marshall said the club will put in safety fencing first up and then start to prepare the track with some sandy dolomite soil.

“They’re all revved up and waiting to race so this is great news and they’re ready to get started so they can host inter-regional and interstate competition and events and have their first big race day at Easter,” Mr Marshall said.

The funding will also allow for some upgrades to the pit area and some more amenities.

Once the track is bedded down and safety fencing in place, local policeman Senior Constable Heath Roberts should be able to tick it all off for a sports and recreational licence.

Mr Marshall said S/C Roberts had been a strong supporter and adviser to the club and the licence would come through affiliation to the National Dirt Racing Association and meet sporting and safety standards.

“The club was formed about four years ago and now boasts about 20 members, all mad keen to match their mower models with mates on a dedicated race track,” Mr Marshall said.

Mr Jackson said the club was a real family-oriented group, and there’d been numerous working bees and volunteer hours to turn the grounds into a real mower racing track, but the club really had pinned its hopes on the first grant funding to give it a start.

They’ll race on a 330 metre round track with a dog leg on the back straight, which makes for some interesting manoeuvres, especially since they can also start off going clockwise or anti-clockwise, but it will be a blueprint for mower racing tracks because it’s the first time it’s been done in NSW.

“The mowers are basically your regulation backyard model, they can run 30horse power motors only and they have to look at least 75 per cent like the weekend lawn variety,” Mr Marshall said.

“But they can get up to about 70km an hour – which is a bit faster than what your everyday house machine will do unless it’s geared up.”