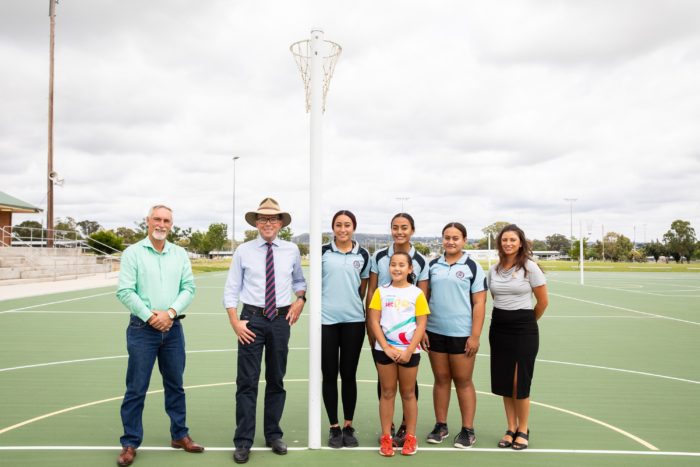 TWO netball courts at the Inverell Sporting Complex, at risk of decommission due to cracks in the surface, have been ‘passed’ a life-line, with Northern Tablelands MP Adam Marshall today announcing a $485,150 State Government grant for emergency restoration works.

Mr Marshall said across the region netball associations had been grappling with how to restore and maintain their older courts for future generations.

“Weather, ground-movement and general play have taken a toll on many of our local netball facilities, many of which are more than 20 years old,” Mr Marshall said.

“At Inverell, the two main show courts have experienced significant movement in the sub-base, which has caused cracks and instability in the top asphalt surface.

“In order to restore the courts before they have to be fully withdrawn for player safety, Inverell Shire Council will install new all-weather synthetic plexipave surface.

“Plexipave tends to provide greater traction for players, it dries quickly after rain and can lower court temperatures by 5-7 degrees making for a more comfortable playing experience.

“Reinstating these courts will benefit in excess of 500 players, with the facility used by the netball association, school sport and regional carnivals and clinics.

“This is the final stage of council’s long-running plan to modernise the Inverell Sporting Complex, which has included upgrades to the soccer, touch football, cricket and athletics facilities.”

Since 2015, the State Government has contributed $1.8 million to the staged Inverell Sporting Complex redevelopment.

“Over the last five years, netball registrations have increased by over 40 per cent, so this funding is backing a booming sport in our shire.

To ensure minimal disruption to netball association activities and school sport at the facility these upgrades will be undertaken in stages. Council anticipates all works will be complete by early 2023.

“We will use local contractors for elements of the project, with the plexipave surface being installed by a specialist company located outside Inverell Shire.

“Recognising the popularity of netball in Inverell, council has worked closely with the Inverell Netball Association to secure this funding, which provides a springboard for the club’s next 20 years of growth.”