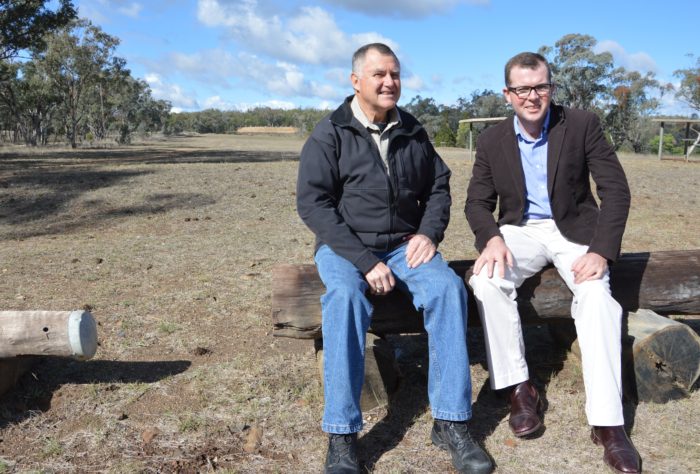 Member for Northern Tablelands Adam Marshall, right, pictured with Inverell RSM Civilian Rifles Club Captain Laurie White at the 500 metre mark on the range – the stop butt is visible in the far background.

Mr Marshall said the funding was part of the government’s 2015/2016 Safe Shooting Program and would allow the club to undertake safety upgrades to stop butt portion of the shooting range at Inverell.

“This program is a terrific way to help clubs maintain the required level of safety and the Inverell range needed work to extend the edges of the stop butt which is the business end of the range where targets are located,” he said.

“In fact, the Inverell range, like many in regional centres, dates from the time of the Great War when it was constructed to train recruits before they were deployed.

“This range is widely used by a number of clubs and I was impressed to see it is kept in terrific order, this funding will allow for some important earthworks to be undertaken.”

“We were thrilled to receive the funding and it will allow earthworks on the edges of the target area, the stop butt, to be completed,” Mr White said.

“A number of local shooting clubs make use of this range and we all work in together to keep it in top shape, including help from the Inverell Shire Council which slashes the grass on the range during the warmer months.”