INVERELL SERVICE NSW CENTRE ON TRACK FOR MAY OPENING 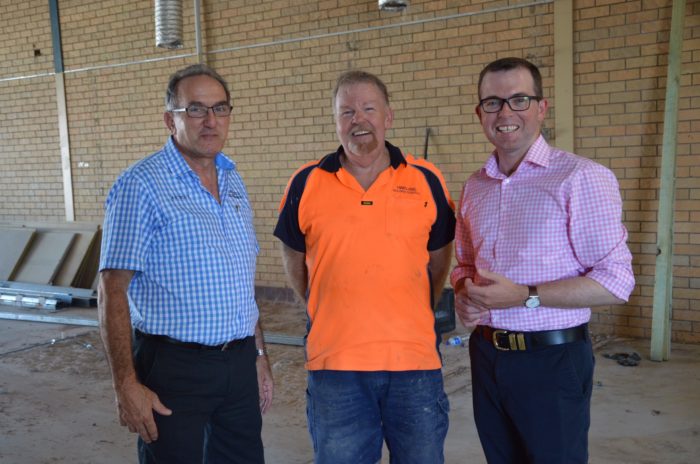 WORK is underway on the construction of a new one-stop-shop for NSW Government services in Inverell and it’s on track for opening for business in May, according to Northern Tablelands MP Adam Marshall.

The pair discussed the timetable and works progress with site manager Noel Harland who is preparing the old print business shopfront building for the large fit-out to come.

The local Harland building services company has been on-site for a couple of weeks and expects its preparation works to be completed within 10 days when the construct, refurbish and fit out team will move in.

Mr Marshall said Service NSW Inverell was the second such centre to be established in the Northern Tablelands and if the business model and results was anything like that being achieved since Armidale opened in February 2015, then Inverell could expect great service and government services on tap quickly and easily.

“Carrying out multiple transactions in one place saves everyone time and money.

“Additionally, the centre will be open for extended hours Monday to Friday and on Saturday mornings so customers can come in at time that suits them. The centre will employ additional staff in Inverell and provide improved customer service.

Deputy Mayor Anthony Michael said he was looking forward to the opening.

“Inverell is really happy to see the expansion of services to Inverell and the opportunities for employment this one-stop-shop will bring,” Cr Michael said.

“It’s a great idea and hopefully people will support the extended hours the centre will bring for customers.”

Mr Marshall said he was also in discussions with federal government about extending the Inverell centre services to include passport applications and processing. The centre will be located at 240 Byron Street, Inverell.